FORT KNOX, Ky. – Cadets from 2nd Regiment, Advanced Camp took the meaning “early bird gets the worm” to a different level this morning to take on the Army Physical Fitness Test (APFT) at 4 a.m. 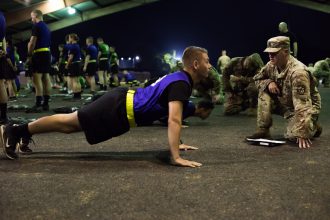 The APFT is an evaluation for the Cadet to do as many push-ups and sit-ups they can do in 2 minutes while meeting the minimum requirement based on their age and gender.

“Its important because it evaluates how physically in shape you are as a Cadet,” said John Owens, Virginia Tech University.

After those events they run 2 miles. If the Cadets want to earn RECONDO status for camp they must run the 2-mile in 13 minutes and 30 seconds or faster.

The APFT is the baseline to the Army. “It is testing our muscular endurance and our aerobic endurance,” said Cadet Andrew Denhard, Northern Arizona University. “I had to eke out the last push-up; I had 71 and 5 seconds left and I shook my way up to 72.”

For some Cadets this APFT test was a breeze but for others it tested their physical strength and mental strength.

“When I first took the APFT my freshman year I failed the sit-ups, that was my worse event,” said Cadet Dominick Betancur, Azusa Pacific University. “Now it’s not that bad. It is generally pretty good, I’m still working on maxing out on sit-ups.”

Others had to pull their strength from their battle buddy or from within themselves.

“It definitely helps to have a battle buddy, someone to push you, encourage you and to motivate you,” Denhard. “I don’t think I would have ran as fast if I didn’t have my friend with me.” 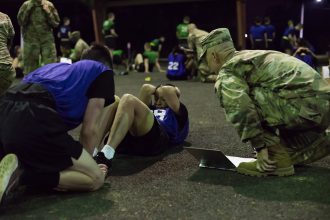 Cadets pushed themselves until they had nothing left to give.

Cadet Rashad Alford from Albany State University had to tell himself “you are going to keep pushing forward. It’s tunnel vision always, your goal is the finish line.”

The Cadre were rooting on the Cadets to push themselves harder. They constantly would scream, “get up” during the sit-ups and push-ups.

“You never want to give up on yourself because you have the highest faith in yourself and your team. If you fail yourself you are going to fail your team,” said Alford.