Fort Knox, Ky.–Cadets at Advanced Camp made history June 3, 2019, by being the first Cadets to throw live hand grenades during their time here at Cadet Summer Training.

The Cadets were briefed on hand grenade procedures and then were given the task to practice with training grenades. Once they passed the training portion, they were taken down to Christenson Range where each Cadet had to complete two safe throws with live grenades.

Maj. Edward Adams, an ROTC instructor at Gonzaga University, said the live hand grenade event is a way to make the Cadets training more rigorous. “It used to be done years ago. Recently there has been a move across TRADOC to increase the rigor of all training across the board.” 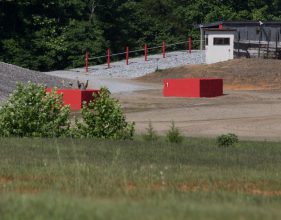 For most of the Cadets, however, they thought it added an interesting element to Advanced Camp. Cadet Dillon To attends Drake University and is from Des Moines, Iowa. He was the first Cadet to throw a grenade at Advanced Camp. He said, “I freaking love it… I was literally looking forward to it. I just love the thump you get in your chest from hand grenades.”

Cadet Lukas Banhidy, out of the University of Kentucky, and from Olmsted Township, Ohio, said there wasn’t anything to worry about. “It’s definitely interesting. We go through a lot of growing pains. It’s a challenge but it’s worth it in the end.”

Though most of the Cadets had fun, some still needed a bit of reassurance before they got out on the live range.

Cadet Joshua Square, attending Hampton University, from Bristol, Virginia, said “They told me to calm down. That’s like our biggest thing at CST, because a lot of us are stressed out because we want to go-no go, but when they told us to calm down almost everyone passed.”

After the Live Hand Grenade the Cadets ate a nutritious lunch of Meals Ready to Eat (MRE’s) and then went across the road to the Assault Course. 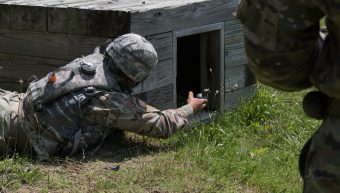 demonstration. “They will demonstrate the ability to utilize them in a combat situation.”

Cadet Justin Dicarlo, who attends Washington University in St. Louis and is from Villanova, Pennsylvania, described his plan for the course before he went through it. “The Cadre kind of surprised us with this assault course, so I’m hoping to use the training I got from the morning to be able to pass all six events.”

The Cadets attitudes appeared to be lifted during this course. Cadet Drake Bradley, a member of Montana State University’s ROTC program, from Sandpoint, Idaho, spoke about using the skills he learned that day.

“We’re putting it together as one, building that confidence. Ready to go.”