FORT KNOX, Ky – George Blair Range was in full use around 7 a.m. today as the 1st Regiment conducted their weapon qualification.  Cadets had spent the previous two days honing in on their marksman skills to prepare for this morning’s qualification. 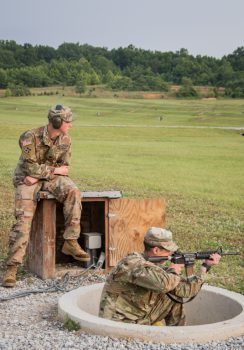 “We spent the last 48 hours detailing, zeroing and adjusting the clicks, knobs and turns so that we could come out here and qualify,” said Eric Jones, a Cadet from the University of Tennessee at Chattanooga.  Zeroing in a weapon involves aligning sights in a sight picture and then aligning aiming points at a target.  Jones explained, “You spend two-thirds of the mission planning and one-third acting on.”

Some Cadets want to branch infantry and found this training very beneficial.  One of these Cadets was Keyton Kidd, a prior enlisted Soldier in the Oklahoma National Guard. “In the infantry, obviously you need to know how to shoot, you learn different movements and tactics…today is pretty much the basics. You come here and you use that zero to shoot targeted meters from 50 to 300 meters.”

Cadet Andrew Dietz, from California State Fullerton, explained, “The whole point of this is to master the basic soldiering tasks.  Every Soldier is supposed to be able to shoot proficiently with their weapon and so we came out here with the goal of hitting expert.”

To achieve an expert qualification, Cadets must hit 36 out of 40 targets.  A sharpshooter requires a score from 30 to 35 and the basic marksmanship badge ranges from 23 to 29 out of the total 40 targets. 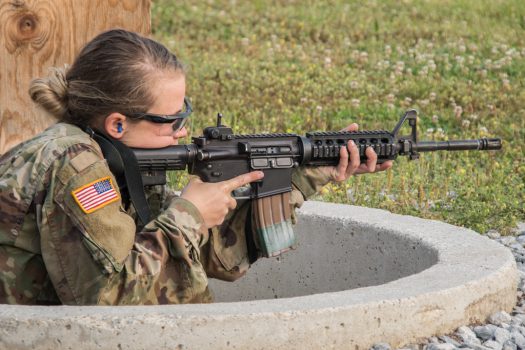 Each Cadet received 40 rounds, one 20-round magazine and two 10-round magazines.  Jones urges future Cadets to pay attention to details after he loaded a 10-round magazine instead of a 20-round and ran out of ammunition while shooting.  Jones quickly realized his mistake and changed to another magazine.  He ended up qualifying as a marksman. 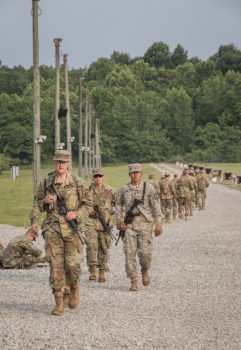 Dietz, who qualified as a sharpshooter, advises incoming Cadets to be familiar with the range and remember to remain calm throughout training. “Study the sequence of a pop-up range because a lot of people weren’t familiar with it and take it seriously. It may seem like you’re out here for a lot of days and it gets tiresome, but its 37 days…If we can’t do it at this level, then who are we to lead other soldiers,” said the Lake Forest, California, local.

Cadet Mitchell Humphrey, who attends Methodist University in North Carolina, was grateful for the Cadre who have been helping him and his regiment since they arrived two weeks ago.  Humphrey, who qualified as a sharpshooter, wants other Cadets to use Cadre to their advantage. “Regardless of your background with weapons, take all the advice from the Cadre. Let them teach you, listen to them, be humble and they’ll most definitely help you.  You’ll be successful if you do this,” said Humphrey.

Some Cadets were given another chance to qualify if they did not earn marksmanship their first try.  1st Regiment has completed both day and night land navigation, first aid training, Call for Fire, and now weapon qualification.  Jones and Dietz both agreed that although weapon qualification is not the hardest event they’ve completed since being at Fort Knox, it is up high on the list and incoming Cadets should prepare.