The live, fire grenade range was brought to CST this year to give these future officers the same experiences Soldiers they’ll lead someday. Since Cadets will be throwing live grenades they went through training before they were able to throw anything.

First Cadets learned about the grenade, the proper throwing motion and safe handling. Handling the grenade includes the following: the sweep of safety clip, twisting confidence clip, pulling the pin out and taking the appropriate stance.

“Multiple practices is to get the Cadets comfortable with throwing grenades because some have never thrown a grenade before,” said 2nd Lt. Luke Beal.

“So, they have a red line about 15 meters out from where they are throwing,” said Beal. 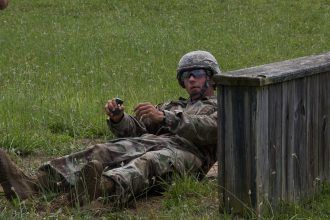 A Cadet who successfully throws a practice grenade past the red line moved down to the live grenade range. One who misses the red line received additional training.

“We practice more times than we actually throw live grenades,” said Cadet Tyler Rabe, San Diego State University. “When it came time to throw a live M67 fragmentation hand grenade I was a little nervous when I had it in my hand.”

Cadets would “overcome the nerves by focusing on what the cadre were saying and focusing on our training,” said Cadet Matt Tavarone, Rowan University.

“This training is important for competence, trusting your equipment and builds trust in your peers,” said Beal. “Come out and do your best and have fun with your peers.”

The Army’s Got Skills