FORT KNOX, Ky. — Leading people is hard, but leading your peers is even harder as the Cadets of 3rd Regiment found out today at the Field Leadership Reaction Course (FLRC).

The FLRC training the Cadets tackled was a course that was comprised of 12 different obstacles of which the Cadets are asked to attempt and or complete six.

The idea behind these obstacles is to build teamwork between these Cadets who have only known each other for about 72 hours, as this is the first time the Cadets get to face a problem as a unit rather than individually.

Lt. Col. Daniel Gregory, Professor of Military Science at the University of Hawaii, was one of the Cadre overseeing the course as a whole. During his opening speech to the Cadets about the course he told them that this course on average only two of the six get completed. However, it’s that failure that breeds leaders.

“What we are focusing on, as Cadre, is how are they working together,” Gregory said. “Are they infighting? Are they providing clear guidance? Is one person actually taking charge or are they just kind of letting mob rule take over? So, it’s through that failure that we actually get to put them into the leadership crucible.”

The idea of teaching through failure is what drives most of these courses in terms of design. 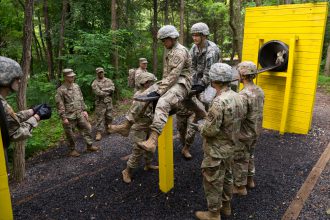 “Each obstacle is only given just enough equipment. Not enough to make it easy, but enough that it is doable.” Gregory said, “The challenge is, their initial plan is often misleading based on the equipment that is placed…and it requires them to try their first plan, realize that it is not going to work, reassess and reattack the problem.”

Jared Grato, of Madison, Connecticut, and a James Madison University Cadet, was one of the many who found that leadership came from these mistakes.

“We do a lot of leadership confidence building,” Grato said. “It’s mainly to build our character, learn how we will discipline other troops and how we get the mission done effectively. We use these mistakes to see what we can build upon as leaders.”

Madelyn Comito, an Apex, North Carolina, native, built upon this idea of having confidence as a leader and the decisions you have to make as a leader.

“One of the biggest things is communication,” the North Carolina State University Cadet said.  “It’s good to listen to ideas, but at some point, in that leadership role, you have to just take charge and decide what your plan is and go with it. It’s good to get feedback but at the same time, too many good ideas equals no singular good idea. And no action.”

She echoed these thoughts in her tips to future Cadets. 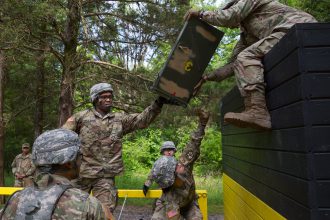 “Be confident,” Comito said. “I think confidence is one of the biggest things. Project your voice. Even if you make a bad decision, if you’re confident people will continue to follow you. So, you will be able to learn from your mistakes and making the wrong choice.”

Dylan Knox, a Cadet from the University of Delaware and hailing from West Chester, Pennsylvania, gave further advice on being a leader when dealing with these obstacles.

“Here as a leader you need to listen to everybody in your squad,” Knox said. “Listen to all of their ideas, what they have to say and come to a decision from there. But ultimately the decision you make is yours and you have to execute that decision. You cannot have multiple leaders trying to give their input. You need to have one singular voice at the end of the day.”

However, these courses also help give Cadets an idea of what each other can do and more about themselves in the trial and error. 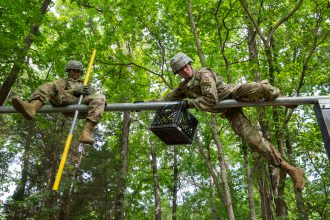 “Going through these courses, the main thing you learn is teamwork,” Campbell said. “You learn what each individual Cadet actually brings to the table. You have to utilize their special skills and talents in order to complete the lanes.”

He also had his own advice for future Cadets attempting these courses.

“When in charge, be in charge,” Campbell said. “A bad plan is better than no plan at all.”