For Cadet Matthew Clark, from Hilliard Ohio, attending Ohio State University, the decision was made in high school.

Despite growing up with no military background, Clark said he always had in interest in the military and the Army. He made the decision to pursue a career in the Army through ROTC his sophomore year of high school.

Clark wants to be an emergency room or trauma nurse specifically for the Army because of the experience he would gain and the ability to serve a deserving clientele.

“Who else better to help and serve than those who are out on the front lines getting shot at?” Clark said. 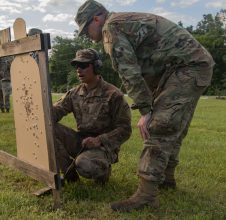 After hearing about ROTC and opportunities available for him, Clark started the process of joining. He applied for the National Board Scholarship for ROTC and went through an interview with the Professor of Military Science at Ohio State University. A few months later, Clark received the news that he was chosen to be a scholarship recipient.

This meant it was time to train. Clark started training in hopes of passing the Army Physical Fitness Test with high scores.

Upon graduating high school, Clark headed to Ohio State and met the people in his program.

“My first day was at 5 a.m. in the middle of a sports complex where we had all these briefs and then we had PT right after and the whole time I was thinking ‘What in the hell did I get myself into?’” Clark said.

Clark felt a little overwhelmed that first day based on his lack of experience, but he was not alone in this feeling. 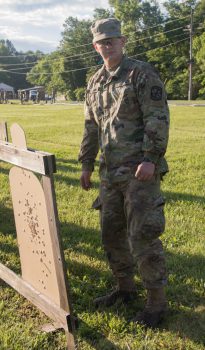 Cadet Matthew Clark from Ohio State University, looks straight at the camera after studying his target to learn how to zero his weapon during Group and Zero training on May 31 at Fort Knox, Kentucky. | Photo by Reagan Zimmerman, CST Public Affairs Office

“I had no experience and had no clue what I was doing,” Clark said. “A bunch of people were in the same boat and the higher leadership saw this and made sure we were all getting comfortable and acclimated to the environment. We all got closer because of that, that is how I made all my friends in college, we all hang out together and live together.”

Joining the Army has given Clark a sense of purpose.

“My favorite thing is that it gives you a sense of purpose,” Clark said. “You are not just bumbling through life without a reason…for us, and me especially, in the Army I am going to be serving my country. I am doing something important.”

Now three years later, Clark is taking part in Cadet Summer Training at Fort Knox where he is completing Advanced Camp. The 1st Regiment, Alpha Company Solider has enjoyed getting to know a whole new group of people while also learning new skills.

“Honestly, [my favorite part] is the platoon and the people that I have worked with,” Clark said. “We did not know each other seven or eight days ago. We just met and we are already acting like best friends. I am looking forward to keeping in touch with these people, these are friends I am going to have for a long time.”

Refit Day: Singing in the shower

Building Leaders Through The Grade Sheet