Niagara University student, Cadet Conor Diggs from 1st Regt. holds his hands above his head to show he has finished sealing his Joint Service General Purpose Mask (JSGPM) during the Chemical, Biological, Radiological and Nuclear (CBRN) test June 8, 2019, at Fort Knox, Ky. CBRN training helps build the Cadets’ confidence that their equipment is made to protect them during chemically dangerous situations. | Photo by Makayla Holder, CST Public Affairs Office

This 4-hour event is part of Cadet Summer Training, where all Cadets must learn the procedures involved in CBRN safety. While the most anticipated part of this training is going through the confidence chamber, Cadets also must learn how to properly adjust protective clothing, don a gas mask, recognize different CBRN dangers and more.

After going through the entire process, several Cadets shared their explanations of what it’s really like to go through the confidence chamber. They shared their stories, step-by-step, of how it felt to be in a room filled with active CS gas.

At the beginning of the training, some Cadets were visibly nervous while others were excited. Sasha Godfrey, a Cadet attending University of Alabama, explained how she felt before going into the confidence chamber for the first time.

“I’m not nervous,” Godfrey said. “I’m more curious to see what it will be like, anxious maybe.” 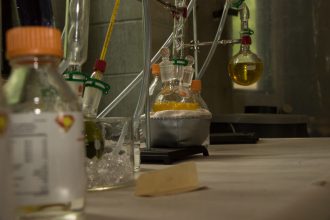 A mock-up lab is used in one side of the Confidence Chamber to help illustrate what the gas is made of to Cadets June 8, 2019, at Fort Knox, Ky. | Photo by Makayla Holder, CST Public Affairs Office

Before going into the room where the CS gas is actually live, the Cadets had to enter a simulated lab. This taught them more about the dangers of chemical and biological exposure.

Even in this room, some Cadets were already reacting to the nearby gas. Sarah Madura, an Illinois State University student, explained how she could slightly feel the effects of the gas while standing in the simulated lab.

“As we were getting in line, we went into one of the rooms and I could start to feel some of the gas,” Madura said. “So, I started sneezing and my skin started to burn.” 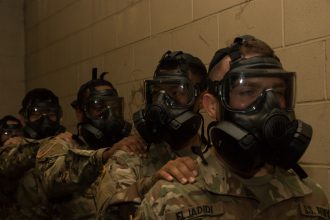 Cadets were then ordered to go inside the chamber with their gas masks on. They lined up against the wall, waiting for orders from the Cadre inside. Some Cadets immediately felt the effects of the gas on their exposed skin.

Madison Beasenburg, a Clemson University student, explained what the gas initially felt like on her skin before removing the mask.

“It didn’t seem bad until it kind of crept on your neck,” Beasenburg said. “It got spicy, like pepper, I don’t know how to explain it. Then it got on my hands and I could feel it.”

While the Cadets were in the chamber, they were ordered to raise their masks for a few seconds while holding their breath and closing their eyes. Then, they had to clear and seal their mask back into place. This allowed them to learn to trust their equipment even in active situations.

Javeus Boddie, a Cadet attending Virginia State University, was completely comfortable inside the chamber while wearing his gear.

“When I first got in there, it was all cool,” Boddie said. “Then, they told us to release the mask for the first time. But when we released it, we only released it for a few seconds. They told us to hold our breath, so it wasn’t really that bad. So, I was like okay, maybe it’s not as bad as everyone thinks.” 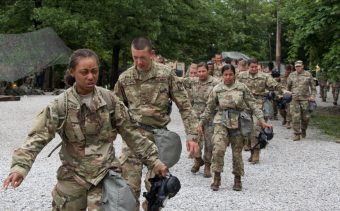 Cadets Deshonde McCray (left) and Ian Kosaka lead their fellow 1st Regt. Cadets from the Confidence Chamber towards water to relieve the pain caused by the CS gas June 8, 2019, at Fort Knox, Ky. Chemical, Biological, Radiological and Nuclear (CBRN) training helps build the Cadets’ confidence that their equipment is made to protect them during chemically dangerous situations. | Photo by Makayla Holder, CST Public Affairs Office

Finally, the Cadets were told to completely remove their mask and try to sing the popular children’s song, “Baby Shark” before being allowed to exit the chamber. This was difficult for most of them because the gas burned their throats as soon as they took a breath.

Ryan Schmitz, a Virginia Military Institute student, explained what it felt like taking that first breath after removing the mask.

“Right when we took it off, I was fine because I took a big breath,” Schmitz said. “And then all of a sudden, I took a short, little breath and it went downhill from there. I was like gagging, eyes crying – it was bad.”

The gas caused a different reaction for each person, but it commonly made the Cadets’ eyes water and noses run. After exiting the chamber, many of them were spitting, coughing and yelling in discomfort. 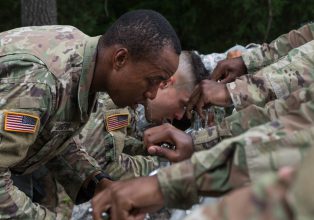 Michael Cammack, an Old Dominion University student, has experienced the confidence chamber four times. He joked about the effects of the gas.

“I’m going to make it simple,” Cammack said. “This is the stuff they need to be selling in the stores for when you get the flu. If you ever get stopped up, this is what you need. If you go in there with a stuffy nose, you’re coming out breathing from everywhere. It’s awesome!”

The CBRN training was an experience which gave these Cadets a newfound respect for their equipment. Now, they can continue Cadet Summer Training with a memory they’re unlikely to forget.