Sgt. 1st Class James Nichols, from 4th Infantry Division, described the course. He said, “This course is the hand grenade qualification course. They are going to have one lane with six stations, they need to get a go, that is (passing) four out of six stations. It’s all graded on a go or no-go basis, depending on alternate throwing positions from knock out a bunker, to knock out a mortar pit, to taking out a vehicle.”

The Cadets were optimistic about completing the course. They each had their personal goals that they wanted to achieve.

Cadet Ryan Kaylor, who attends Texas Christian University, and from Charlotte, North Carolina, said, “My goals for this course are to successfully navigate all the key tasks that need to be cleared. Which is throwing live hand grenades, completing the grenade tactics course, and getting my go for this event.” 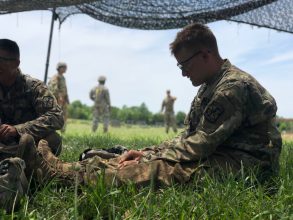 Kaylor went on to speak about how it will benefit his future. He said, “For me personally, I’d like to be a combat arms officer. In the combat arms world, grenades are one of the tools of the trade, and kind of getting a mastery, an introduction to grenade throwing, will help you be more prepared for when you go to that profession to get more weapon immersion.”

Cadet John Owens, attending Virginia Tech, and from Bakersfield, California, spoke of the importance of this course. He said, “This is more of a confidence course for grenade throwing for Cadets. Just to instill that ability to be able to go out and throw a grenade, and have the confidence to do everything.”

Owens continued, “It helps with our futures, because officers are supposed to have a wide range of knowledge. And throwing a grenade is one of those basic tasks that every Soldier should be able to do.” 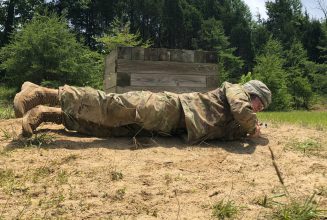 The Cadets said Cadre were very helpful in preparing them for this course. Cadet Maurice Owens, who attends Pfeiffer University, and is from Havelock, North Carolina, said, “They (Cadre) are going to teach you everything you need to know. So, there is nothing to stress out about. They are here to help you, not hurt you.”

He continued, “They explained exactly what we needed to do, they also demonstrated. Then as you go through the cycles and different courses, they are walking you through it.”

Cadet William Lee, here from the University of North Georgia, and from Columbus Georgia, continued the high praise. He said, “They really help by instilling that confidence by showing how fearless they could be. By holding a round and just letting it go off.”

With the help of the Cadre, the Cadets all went through the course. With this event out of the way they will continue to progress through camp towards their graduation.