One by one Cadets lined up and shouted their University name before completing the hand grenade qualification course at Christensen Range.  After 3rd Regiment threw their two live grenades, they returned to the practice grenades to execute a simulation on a course with six different stations.

For most of these Cadets, today was the first time they handled grenades. This is true for Tazman Briganti.  The Cadet from Virginia Military Institute has never thrown a grenade before this training.  His brother, father, two uncles, and grandfather all have military careers in the Navy, but Briganti is the first from his family to throw a grenade. 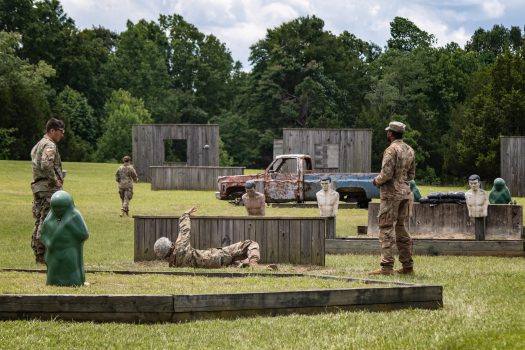 During the simulation, Cadets maneuvered through different obstacles, crawling under fences and over wall barriers, as they were tasked with throwing the practice grenades as close as possible to different objects throughout the course.  Each station required a different approach as Cadets were required to kneel at some, lay on their back at others, or throw standing up.

Texas State University student, Christopher Maggio, explains how this type of training is essential because it builds confidence in the Army’s future leaders.  “This put a lot of people out of their comfort zone. Several of us have not handled anything with that kind of pressure, so it helps you maneuver in certain situations and to think on your feet,” said Maggio. 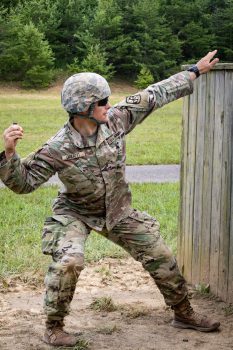 Although this part of training is only with practice grenades, some Cadets were still nervous to maneuver obstacles with the mock grenades, including Briganti.  However, after he completed the course, Briganti was grateful for the experience.

“It’s a great opportunity to get out here and get the experience that other soldiers will have when you arrive to your unit; they’ll obviously already have thrown grenades at basic training. Although you might not be responsible for employing those weapon systems in the field specifically, it’s good to have the knowledge and confidence to know that you can do what your soldiers have done. They’ll have that respect for you as well because you have completed similar training,” said Briganti.

Cadet Kendall Douglass, a student from Hampton University, agrees with Briganti, “You are more relatable when you have that common ground that’s established between soldiers because they know that you went through the same thing that they did and it’s a sign of respect.”

Douglass, who wants to branch Cyber Security once he commissions, was influenced to become an Officer in the Army by his mom, who is in the Air Force, and aunt, a Colonel in the Army. 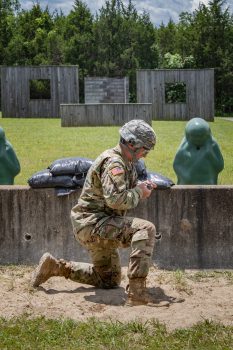 For Maggio, the decision to become an Officer in the Army was one he struggled with for quite some time.  “For the longest time I didn’t want to join because I wasn’t sure what I wanted to do and then it just started calling to me more as a bigger experience I want to do in life,” explains Maggio.

His father was an Armor Officer in the Army for twelve years and grandfather was an Army Officer who served for twenty-five years. They both were big influences for Maggio joining and becoming an Armor Officer as well.  “When I was young, I saw those tanks roll out, and that was the coolest thing…it’s just funny how we went along the same route,” said Maggio.

Briganti, who also wants to branch Armor, struggled with his decision to join the Army as well – the majority of his family is serving or did serve in the Navy. Briganti originally wanted to join the Marine Corp, however, he couldn’t pass up the scholarship and other educational and career opportunities the Army offered.

“The Marine Corp has a lot more combat oriented jobs. I kind of loved that in the Army, you could branch detail, a Combat Armor’s job, and then go into a more transferrable skill afterwards.  It kind of sets you up to get the combat experience, and then you get the training that will set you up for a [civilian] job afterwards,” said Briganti.

Briganti explained that his father was happy for him even though he has strong roots with the Navy, saying, “My dad went to the Naval Academy so he was a little bit upset because now he has to root on separate sides of the football field.”

One Team, One Fight

A shot above the rest