FORT KNOX, KY. — “Be flexible and be ready for anything,” said Cadet Zaw Aung, from the University of Pittsburgh, “you have no idea where anyone is coming from.”

The Field Leader Reaction Course (FLRC) helps prepare Cadets for this. During their third day at Cadet Summer Training, Cadets had to overcome six different obstacles at FLRC. They were given 17 minutes for each of the obstacles they faced.

During this training, Cadets learn how to lead effectively or listen to the squad member in charge.

5th Regt. Cadet Daniel Gray crosses the “cliff” while also having to take the casualty with him at FLRC at Fort Knox, Ky, June 15. | Photo by Matthew Billiot, CST Public Affairs Office

Cadet Thomas Booth, from Ohio University, said that the obstacles, “are meant to hinder you and make you think on your feet.” Some obstacles have ammo cans and rope or even a casualty that they have to get across the course.

According to Booth, Cadets learn how to communicate and work as a whole while under pressure. He said Cadets are made to think outside the box, too. It shows the importance of communication in leaders.

“I think the most important thing is to listen to your peers and take what they have and try to sift through to try and find what is good and what is not and use their input to get the work done,” said Booth, “because you cannot do it by yourself.”

It is important for Cadets to keep track of their time so that the Squad can get everyone across before time is up, according to Booth.

“It takes a village to accomplish this kind of goal,” said Cadet Nicholas Kolb, from the University of South Alabama, “Just work together and stay calm.”

Kolb also said that it is significant to listen before you speak.

He mentioned how being a leader also means admitting when you do not know the answer, sometimes you have to look to others for help.

Kolb said having a team full of people with Type A personalities can be difficult since everyone wants to lead. 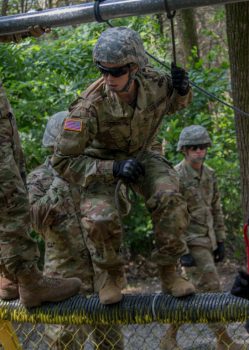 After getting to the middle area, squad leader and 5th Regt. Cadet, Karrin Larson observes how she can cross to the end of the Elevation obstacle at Fort Knox, Ky., June 15. | Photo by Matthew Billiot, CST Public Affairs Office

“When in charge, be in charge, but also be prepared to step up and make a decision yourself [if need be].” Kolb said.

“[FLRC] offers [Cadets] a chance to work together, build leadership and learn communication properties and learn about what it is like for them to be the best leader that they possibly can,” said Staff Sgt. Stephen Shelton who was in charge of the Elevation obstacle.

Shelton continued by saying, “It helps the Cadets build cohesion together. It is a way for Cadets to learn how to get task oriented on goals.”