FORT KNOX, Ky. — The humidity was beating down on the Cadets from 3rd Regiment, Advanced Camp on the last day they did buddy team live-fire during Cadet Summer Training. 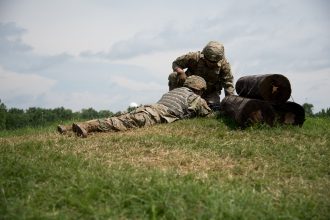 The 100-meter lane requires the Cadets to move forward seeking cover from wooden barriers and logs. While one moves the other provides covering fire.  Last week’s rain created mud pits, often where a Cadet finished his three-five second rush and began a low or high crawl to cover.

Williams said she wasn’t nervous about the actual lane because she had a great partner, but the mud concerned her.

Buddy team live-fire range teaches Cadets to work together to accomplish a common goal. Working together can have its challenges but its more about how to work together to overcome them. Williams and her battle buddy figured this out a few days before todays live ammunition run.

“When we did the blanks we both accidently tried to go at the same time, but then we figured it out,” said Williams. “That was the extent of our communication problems.”

Cadet Ryan Erskine said the noise from the constant firing across eight lanes made communicating with his partner difficult. Erskine said the lane safety nudged them along when they stagnated.

“You need to hear the other person screaming, so we have to rely on our lane walkers to helps us through it,” said Erskine, a student at James Madison University.

For many Cadets this is the first time they have attempted a buddy team live-fire range, while a few have done something similar.

Erskine credited his battle buddy, a prior service cadet, with making their run a little easier. 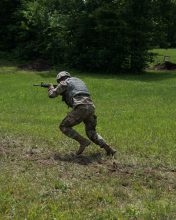 “He is clearly comfortable on the range, he probably has done this before and many times before. Working with someone like that just gives me confidence.”

One Cadet who currently serves in the Army National Guard while completing his studies and ROTC is Joseph Nazzaro.

The University of Albany Cadet spoke of the differences between his enlisted days and what he sees ahead as an Army officer.

“Being enlisted you are starting at the bottom of the barrel, you do have more hands-on experience, you’re more tactical experiences,” said Nazzaro. “Now becoming an officer you’re doing more of the planning on a strategic level where you have more subordinates underneath you to execute the mission.”

Like Nazzaro, Cadet Josinio Andrew enlisted before beginning his ROTC path to becoming an officer.

“I wanted to be an officer from very young and my colonel told me I should enlist first for the experience and have a better understanding of the Army before college and becoming an officer,” said the University of Virgin Islands student. “I feel like being an officer you have a bigger impact in the Army.”

Cadets learn how to work together before they can make any impact in at the Army. Buddy team live-fire helps them build those skills for when they do commission and become an officer in the Army.