Rain. Lightening.  A broken LOMAH system. None of these events stopped Cadets from the 4th Regiment, Advanced Camp from fine tuning their marksmanship skills this morning.  Cadets were scheduled to practice these skills before their weapons qualification tomorrow. 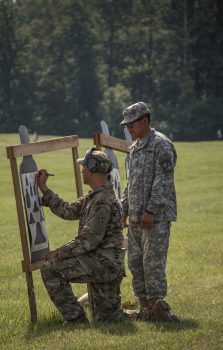 The Rain.  Cadets arrived at George Blair Range as a thunderstorm hovered over them.  Although the rain was uncomfortable, causing some puddles and heavy ponchos, training was scheduled to begin on time; that is until a lightning bolt struck a tree near the Cadets.

The Lightening. “We were lined up for chow and then there was a big lightning strike and we took cover across the road,” said Cadet Zachariah Warhus, a student at Southern Illinois University.  Later, a chainsaw could be heard by everyone on the range as servicemen began cutting the tree down.

The Broken LOMAH. It might have been the rain or the lightening that caused the LOMAH system to malfunction, but because of this, training was behind schedule by almost two hours.  During this time, Cadre set up the 25-meter Alt-C range with paper targets for Cadets to get some practice.

Cadet William Anderson, from Virginia Military Institute, explained what the next plan of action was, saying, “We were supposed to do LOMAH, which is a computerized system on the pop-up range that tells you where your hits and misses are relative to the target, but the computer ended up having some issues, so right now, we’re just doing some shooting drills on the Alt-C target to get ready for qualifying tomorrow.”

Cadets were given three magazines: one twenty-round and two ten-rounds.  They were tasked with hitting the ten different sized targets on the sheet of paper.  The smaller targets simulated further distances, similar to how the LOMAH range has targets at different metered lengths. 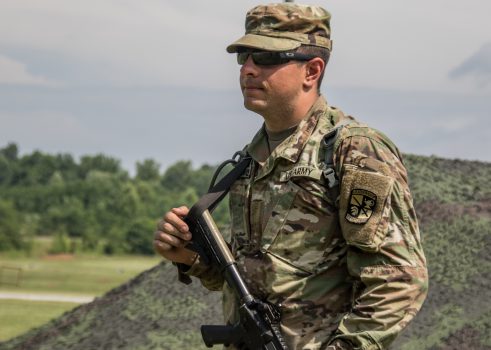 Different body positioning was used by Cadets for each magazine. “You have prone-supported, where you have a sandbag underneath your rifle. You have the prone-unsupported, where you are kind of just holding it with the magazine on the ground. Then you have kneeling, where you’re basically sitting on one foot, your elbow resting on your knee that’s up, and you do your best to stay steady while aiming at a small target,” explained Warhus.

The weather and broken LOMAH range didn’t stop Cadets from doing their best to pass their practice rounds today.  Although both Warhus and Anderson have very little experience with handling an M4 rifle, they both passed after their first attempt.  Between the two, a consensus was made that kneeling was the most difficult position.

Cadet Austin Abling, from the University of San Francisco, agreed, “Kneeling for sure was the hardest. You want to have many points of contact to create support. When you’re in [prone-supported], you have your legs sprawled outwards to give you that triangular base and that platform so when you’re firing you have all that stability on the ground.”

“But when you’re kneeling, you suddenly switch to a bipedal focus with just one leg and you’re focusing on balancing and still trying to focus on breathing,” said Abling. 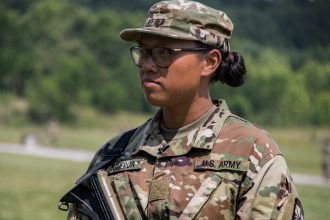 Some Cadets, like Alelee Figueroa, struggled to zero their weapon yesterday, but found the training beneficial as it helped her improve her shot today.  “It took me two times yesterday to zero in, which I was a little disappointed in because last time I shot, I qualified as expert. But today I got thirty-one, so it was a lot better day,” Figueroa explained.

Figueroa has some experience on the range through her ROTC program at Florida A&M University.  About once a semester, the ROTC program will practice with weapons similar to the M4 rifle.  Not only is she an ROTC student, but she also is on her university’s Division 1 track team, where she competes in the hammer and weight throwing events.

The Division 1 athlete finds balancing these two demanding organizations difficult, but rewarding. “Balancing ROTC and being an athlete at my college is crazy. It’s a lot of lack of sleep but it gives you a lot of discipline. It’s extra training because we have practice every day and then PT every other day. It makes vacations and days off very enjoyable,” said Figueroa. 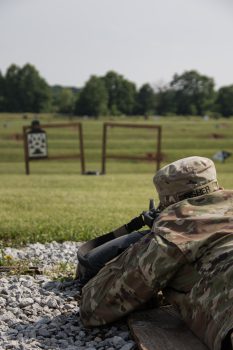 Abling and Warhus both joined ROTC at their schools during the second semester of their freshman and sophomore years; a decision they were confident in making. “ROTC definitely has turned me around. Before, I had some really bad habits and really bad tendencies. It gave me more discipline. I suppose what it really gave me was a path in life that I could see myself doing and find fulfilling,” said Warhus.  Abling has also noticed changes in himself after joining ROTC.

“Knowing about the [Order of the Merit List] really pushed me to get better grades, workout more and do more community service. It pushes you to be a better person,” explained Abling.  The Order of the Merit List ranks all Army ROTC seniors across the nation on their PT scores, grades, extracurricular and community service activities, and Advanced Camp performance.  This rank helps determine what branch and component Cadets get after they commission.

Shortly after Advanced Camp, Albing will be traveling to Texas to participate in The Cadet Troop Leader Training (CTLT).  There, he will shadow an officer to gain valuable experience about life as a future officer in the U.S. Army.

Rain or shine. LOMAH or Alt-C. Cadets persevered through the setbacks and are ready for their qualification assessment tomorrow.