FORT KNOX, Ky. — While the rain may have added more challenge for 4th Regiment Cadets at this morning’s Weapons Qualification, they embraced it with open arms.

2nd Lt. Samuel Tease was one of the Fort Knox Cadre overseeing the event and he noted that while Weapon’s Qualification isn’t new, having the training at the pop-up is. 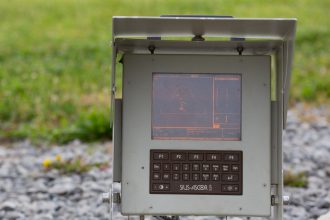 “We did it last year, but it was a non-qualifying event,” Tease said. “I think they realized the pop-ups gave more dynamic training than stationary targets. So, by having a way for Cadets train at varying distances with a more realistic situation. They have to respond more quickly to the pop-ups and so it offers a more authentic challenge for them to really test their abilities.”

More dynamic indeed. With computers that raise and lower the targets, as well as sensors that show the Cadets how close they were to the target, this training is a huge boon to any Soldier’s shooting capabilities.

But Mother Nature decided to throw in one more curveball in the form of a rain shower, but that didn’t slow the Cadets down or lower their spirits. 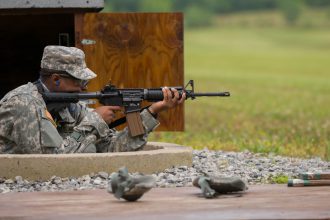 Caleb Groce, of Homestead, Pennsylvania, had done range work before at his university, the University of Pittsburgh, and hopes after Advanced Camp he will be able to hit the ranges more often. He found the rain may have been a challenge, but that it was a welcomed challenge.

“The rain was definitely an X factor,” Groce said. “Any little thing that might make you uncomfortable is going to be a challenge because you want to get consistency and comfortable to be able to shoot well. But any challenges are very much welcome because it’s going to make us better at what we do.”

Cadet Ainsley MacLean, from Central Michigan University, said this event was the one that made her the most nervous going into Cadet Summer Training (CST), but thanks to the Cadre she has learned how to make herself more comfortable on the range.

“I didn’t do great this first time, but I realized what I did incorrectly,” the Brutus, Michigan, native said. “They [the Cadre] have given us some really great training these past two days so I know what I need to do to fix it. So helpfully the second round goes better.”

She too, noted a silver lining on having the rain make its unscheduled appearance. 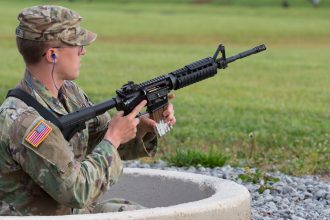 “I do think it was probably a good thing because as an officer you don’t know what situation you’re going to be put in, so we need to be able to shoot whether it is sunny, rainy or any kind of weather,” MacLean said. “I think it’s a good thing for people who need to work on their shooting in adverse conditions.”

If the Cadets are nervous about what weather may do to their shooting ability or if they are nervous about being able to shoot targets that move as the pop-ups do, Cadet Joshua Thomas, a Stockbridge, Georgia, native, offered some helpful advice.

“Yeah, don’t be worried or nervous,” the Jacksonville State University Cadet said. “Even if you mess up you get more than enough chances to try again and succeed.”