FORT KNOX, Ky. — Six miles, two aching feet, 35 plus pounds, and Cadets of 5th Regiment only needed one thing to push them forward, each other. 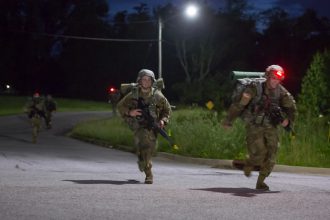 The six-mile road march is the first of three different marches the Cadets will be tasked with over the course of Cadet Summer training. The time limit to complete the event was two hours. For those aiming for Recondo the time to beat was 1 hour and 30 minutes.

Lt. Col. Jack Toohey from Ohio State University was one of the Cadre who rucked with the Cadets, but he had an added task. He was the one setting the 15-minute pace, so for those who wanted to meet the Recondo time, he was the one to beat or keep up with.

Toohey noted that everyone of Alpha and Bravo Co. passed the time limit, and that a lot made it under the 1:30 mark. But the best part of today’s march was seeing the Cadets pushing each other to do better.

“We have a female cadet [Cadet Taylor] who’s probably around five feet tall, and she’s still in the running for Recondo,” Toohey said. “A fellow Cadet [Cadet Cloud] stayed with her the entire time. Got her in, in an hour, twenty-seven. So she’s still good to go.”

Stories like this were not uncommon among the Cadets. Everyone looking to each other for the strength to climb that next hill or sprint the last leg when their bodies told them otherwise.

Georgie Warren, of Rochester, New York, had been nervous coming into the event today because of the must pass requirement.

“I feel really good,” the Mercyhurst University Cadet said. “I mean during it, I was hurting a little bit, but now I feel a lot better, especially after completing it.”

Thanks to some help from her battle buddies, she made it through no problem.

“I think the most rewarding part was one of my battle buddies and I just stuck together the whole time and motivated each other,” Warren added. “I think that was the most important part, just having someone to stick by your side pushing you through it, even when it sucks.”

Nykka Brigoli, a Cadet from Western Michigan University, found that the mental challenge was one of the biggest hurdles to get over.

“It was just all mental to me. I know that I could do it but just pushing myself was the hardest part. We only had two hours of sleep so that kind of got me,” the Rochester Hills, Michigan, native said. “But seeing my friends crossing the line, making their time and then asking them if they made it and celebrating because we all made it helped a lot.” 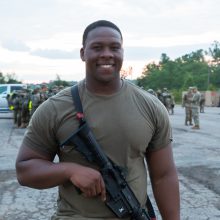 Frederic Minton, a University of North Carolina at Pembroke Cadet, added that even if you don’t talk to your buddies around you it really helped to just see them and pace yourself with them. It’s keeping them next to you that helps push past the pain.

“Well it gets really challenging mentally because you get blisters, your ankles start to swell up and your walking up those hills, but there are other people around you that keep you motivated and it builds that camaraderie,” Minton said. “I think that was the most rewarding part.”

Even through all the blisters and ankles swelling, Minton still had a smile on his face from knowing he passed. Not only had he passed, but he did it with his battle buddies by his side.

Basic Rifle Marksmanship: Cadets Get Familiar with Their Weapons

64 Feet Has Nothing on Me