“Battle Buddy, cover me while I move,” a Cadet yelled during the Buddy Team Live Fire.

“Communication is key in anything you do in the Army and in general,” said Cadet Alex Counter, from Boise State University, “This is a true test of how you communicate on the battlefield and stress environments.”

Cadets from the 4th Regt. Advanced Camp learned how to communicate with a teammate

June 22, after getting up from his cover, 4th Regiment, Advanced Camp Cadet Graham Harper, from the University of Washington, runs to his next obstacle during the Buddy Team Live Fire practice round. The practice prepares Cadets for the next day when they will use live ammunition during the course at Fort Knox, Ky. | Photo by Matthew Billiot, CST Public Affairs Office

while under stressful situations at the Buddy Team Live Fire range, June 22.

Cadets moved in pairs while firing blank rounds down the 100-meter lane.  One provided covering fire while the other advanced.  The lane ended after each Cadet threw a mock grenade.

Cadets used individual movement techniques when going forward.  Three – five second rushes followed by a high or low-crawl to cover.  The recent rains made movement to cover wet and muddy.

“Overcoming the suck of getting wet, messy and dirty, but it is part of what you have to do,” Counter said of the mud.

These are just a few of the obstacles Cadets must overcome during the Buddy Team Live Fire. 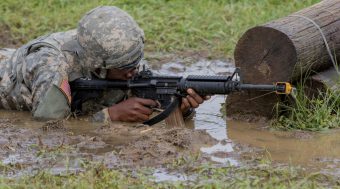 June 22, 4th Regiment, Advanced Camp Cadet Jerome Quenu, from the University of Maryland, runs through the Buddy Team Live Fire practice round and shoots blanks at a target while in the low crawl position. The next day, Cadets will use real ammunition while running through this course at Fort Knox, Ky. | Photo by Matthew Billiot, CST Public Affairs Office

Cadets go through these obstacles while trusting their battle buddy is protecting them. Counter said it is crucial to “keep eyes on your battle buddy at all times.” While in Combat, a Soldier’s life may be in the hands of a squad member.

The way Cadets go through the course is like a leapfrog motion, according to Counter. One Cadet will run to his or her covering and once he or she arrives, the other Cadet will fun to their next cover.

“The best way I can describe it is slow is smooth, smooth is fast,” said Counter. The hardest part for him [his partner] was keeping calm while under the stress environment.

Cadet Elias Moore, from Utah Valley University, said, “If you know proper movement techniques, it is easier to lead Soldiers when you get in those leadership positions.”

“It is better to ask your Soldiers to do stuff that you have already done and know how to do,” said Sgt. Joseph Sanchez, “instead of just barking orders and telling them to execute when you can’t even execute it yourself.”

The training that took place is to prepare Cadets so they can go through this course again, except with live ammunition, the next day.