FORT KNOX, KY.– “Some [college ROTC programs] focus solely on planning, [and] some programs focus more on execution,” 2nd Lt. Megan Brown, from the University of New Haven said. “It is important to learn how to blend those two together to create a solid plan and execute well.”

Cadets from the 2nd Regt. Advanced Camp were able to learn how to blend these two very different learning techniques when they went through their first day of Area of Operations (AO), Grizzly at today’s Field Training Exercise (FTX). 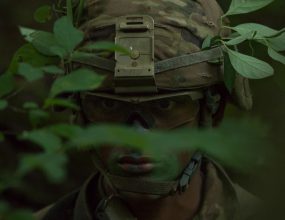 A 2nd Regt. Advanced Camp Cadet watches for the enemy during the Field Training Exercise at Fort Knox, Ky., June 24. Cadets cover themselves in camouflage makeup to blend in with their suroundings. | Photo by Matthew Billiot, CST Public Affairs Office

Some Cadets are more efficient than others at communicating, and Brown, a movement control officer at FTX, said that through this exercise, Cadets are able to realize how well they communicate.

“Going uphill [and] sprinting, that was probably the hardest part,” said Cadet Jonnierah Smith, from Ohio University. Other Cadets spent a good portion of their FTX time crawling through the terrain while waiting for their enemy to approach. 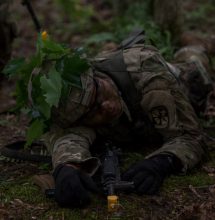 While at a Field Training Exercise, a 2nd Regt. Advanced Camp Cadet is a notional casualty during the attack portion at Fort Knox, Ky., June 24. | Photo by Matthew Billiot, CST Public Affairs Office

And without any warning, the Cadets’ guns fire at the intruders. Covered in green and brown makeup to help camouflage themselves, Cadets successfully defeat their enemy in a timely manner.

Although there were a few notional casualties, Smith, who was a part of the support by fire, said, “There is always going to be mistakes, but you have to use those mistakes to help you progress to the next mission.” 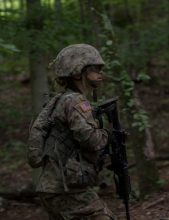 In the future, some Cadets will be conducting missions like these daily and need this knowledge. For Cadets who will not be doing this often, Smith said, “It puts you in that mindset that you would never be in unless you were in that position. If you are never in that position, then you never know your limits.”

“Not everyone goes infantry,” said Cadet Brandon Thurmond, from the University of North Georgia, who plans to be a finance officer, “however, I may have to pick up [a weapon] and help out.”

The weather added to the stress of the mission, according to Thurmond. “You are tasked with doing a pretty large mission under stress, the weather is not that great,” he said, “everyone is tired. We have been out in the field for six or seven days. Planning a mission as a platoon leader or platoon sergeant, it is additional responsibility.”