The West Point Cadets trudged through a heavy rainstorm upon arrival, adding to the apprehension of spending two weeks alongside 1st Regiment for the Field Training Exercise (FTX) portion of Advanced Camp.

“When they came in, we had already been here for two and a half weeks making standard operating procedures for our platoon and integrating as a platoon,” Hudgins said. “And they got here right at the very beginning of the field exercise, and it was really almost seamless how well they integrated in with all of us. So, that was good to see.” 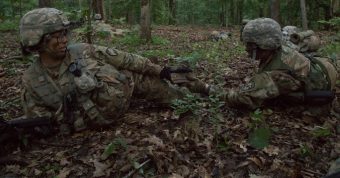 Typically, students at USMA are immersed in U.S. Army training events and classes throughout their time in college. As part of a 4-year program, West Point Cadets become a second lieutenant upon graduating.

ROTC Cadets, however, attend universities across the country. They have a more typical college experience, with occasional U.S. Army training events and classes through their ROTC program. For a common training experience, the ROTC Cadets travel to Fort Knox during the summer after their third year in college. This allows for a large-scale, shared training event to prepare them for becoming an Officer in the U.S. Army.

Major Juan Renaud, Officer in Charge of Plans and Operations for CST, described the purpose of combining the two commissioning sources for training. 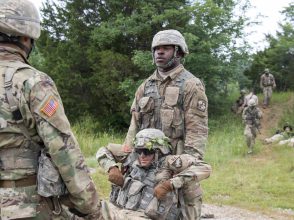 “We started this planning process in October of last year with a few of us going up to West Point and participating in a working group, trying to figure out how to best achieve a cooperation or a combined experience between West Point Cadets and Army ROTC Cadets,” Renaud said. “So, the decision was made that we would do a pilot and that pilot would be with 40 West Point Cadets coming in to participate in a Field Training Exercise with Advanced Camp ROTC Cadets.”

The West Point Cadets only participated in FTX while at Fort Knox. Together, the ROTC and West Point Cadets implemented strategies to accomplish their missions in the field. All the Cadets worked cooperatively to complete the crawl, walk and run phases of FTX.

“It’s different in terms of the broad range of talents that people have – and the eclectic group,” Perinon said. “At West Point, there’s kind of a personality type that you’re used to training with your whole four years. But here, it’s like every single person you’re talking to is from a different part of the United States. One guy in my squad has three children and is 33 years old. Another person is a grad school student. It’s awesome interacting with all of them and getting to train with people that we will see later on in our career.” 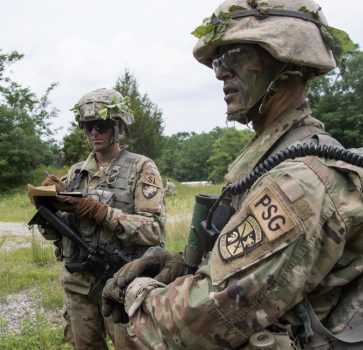 “I’m absolutely ecstatic with how it went,” Munera said. “The integration went very well both to the ROTC Cadets and the West Point Cadets. They were able to come here and both integrate very quickly. When I went out there and watched them, you couldn’t tell who was an ROTC Cadet and who was a West Point Cadet. They were all getting after the problem at hand and working together to accomplish it.”

Although there are a few interactions between USMA and ROTC Cadets each year, the Cadets are mainly disconnected from each other until they arrive at their Basic Officer Leaders Course. This integration at FTX has given both West Point and ROTC Cadets the opportunity to work as a team before commissioning as an Officer.

Next summer, there are plans for as many as 380 West Point Cadets to integrate into Advanced Camp, assigned in the first three regiments. In 2021, the goal is to have about 1,000 West Point Cadets join ROTC Cadets at CST. This way, they will receive a common experience before commissioning.