1st Regiment Cadets graduated from Advanced Camp today on June 29, 2019 and get to begin the next phase of their careers.

Before they were sent off to join their families they received advice from the guest speaker Maj. Gen. Gary Johnston. He told the Cadets, “What took me years to experience, you could experience in your first assignment. So, buckle up.”

The Cadets seemed prepared and eager for that task. They have all passed Advanced Camp are in the driver seat toward their commission into the U.S. Army. 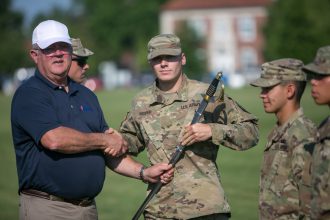 Cadet Mikael Proper attends the University of Nevada, Reno, and was the winner of the AUSA (The Association of the United States Army) Leadership Excellence Award. This award is presented to the top Cadet in each Regiment, as determined by regimental Cadre board.

Proper was also one of twelves recipients of the RECONDO award, which is presented to the Cadet(s) who achieve a 90% minimum on each APFT event, 1st time GO on each Confidence Course, 90% minimum on written Land Nav, 5/6 1st time GO for Land Nav, Go for 1st Aid and CBRN events, complete 6-mile foot march in 90 minutes or less, Sharpshooter (first-time) BRM qualification, and no founded disciplinary action.

When asked if this award was a goal for him, Proper said, “The specific award itself wasn’t, but RECONDO was. I think it just so worked out on the points system I happened to get the highest.” 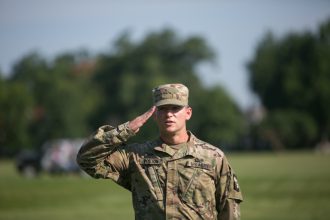 He then discussed how he prepared himself for camp. “It was mostly physical fitness and just trusting the skills that I have developed over the last three years in ROTC and Ranger Challenge. They prepared me a lot.”

Proper said that Advanced Camp, “Was overall a very good experience. I learned a lot more than I expected, I think a lot of us did. We kind of agreed on that, and it was very positive.”

Cadet Joseph Quinn who was a RECONDO award winner and attends the University of Wisconsin-Whitewater described some of the personal hardships he faced in Advanced Camp.

The Mesa, Arizona native said, “Camp Experience was very mixed, there are a lot of chiefs, very few Indians. So, there is a lot of fighting when it comes to there. It’s not always vocal, but a lot of it is just tonal, just how we end up perceiving each other. Then you just end up at a certain point, just looking at someone, and just automatically imaging them angry. You just have a negative connotation already, and that kind of just happens.”

Quinn continued, “But at the same time, you know, you go through this stuff together. So, the people you do side with you get very close to. We went through a lot of hardships out there, especially being 1st Regiment. It’s made us stronger together, and there’s definitely a lot of characteristics that are going to be a part of us that came from camp.” 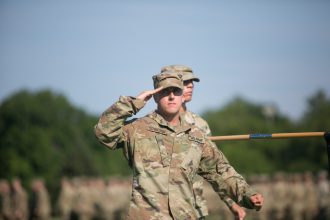 Quinn has big plans after finishing Advanced Camp. “I am moving to Australia in two days for 14 months. I am a marine biologist so I am going to be working on the Great Barrier Reef for a little bit.”

Cadet Charles Grunert attends Norwich University, and is from Lombard, Illinois, won the Military Order of World Wars Award. The award is presented to the Cadet who best demonstrates the ability to evaluate analyze, apply, and understand experiences and capabilities to solve tactical problem sets.

Grunert said that his goals were, “To be a first go on all the events, to receive at least an E as far as ratings, and to not get heat rash.”

He said that he accomplished all of those goals except for avoiding the Kentucky heat. “I got heat rash right at the very end. It was a feat by my standards, I was really happy to survive for so long without getting heat rash. 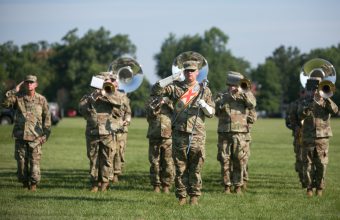 Grunert recalled the most memorable part of camp. “It certainly has to be the field, in general. There are so many hard moments, where you are struggling with other people, struggling with your environment, and you’re forced to be stressed and make decisions with other people and having to live with them. So, I don’t know, I could reference a lot of different things. But the time in the field is really what builds character and really composes what camp is all about.”

Overall, he said, “I definitely did as well as I had hoped for, in fact much better than I had thought I would do. So, I reached those goals and I had a good time.”

Now that Advanced Camp is over for these Cadets, they now await their commission and their future as the leaders in America’s Army.

Returning the life in a rucksack