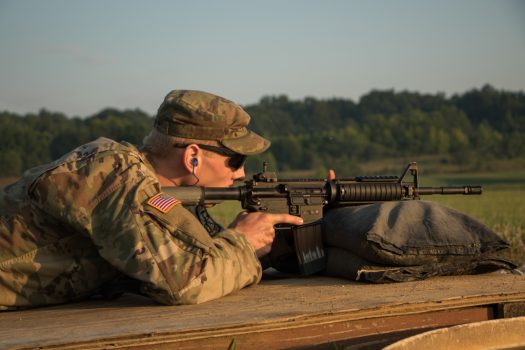 For some Cadets, this morning was nerve-racking while for others like Cleveland State University Cadet David Kullik, from North Olmsted, Ohio, this was a morning full of excitement.

“I am actually really excited,” Kullik said. “It is always fun to throw rounds down range and be with your friends. It is fun testing yourself. Marksmanship is an important soldiering skill, everyone needs to know it. It is really fun to put it to the test and compete with your buddies and yourself to do the best you can.”

Cadets found various ways to work through the nerves and successfully qualify.

“It was quite stressful but once you get on the firing line, you are completely fine.” Cadet Dylen Hicks, from Delphos, Ohio, said.

The Kent State University Cadet found the most aid in his NCO who talked them through firing drills last night. 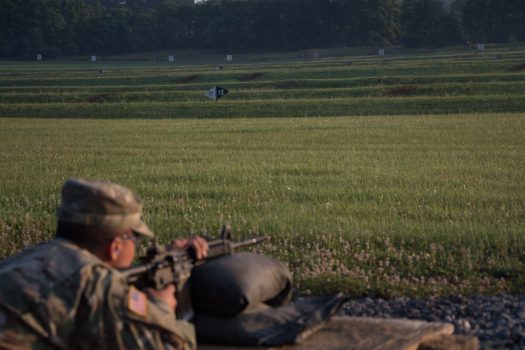 “He was the calm voice in the storm helping everyone out,” Hicks said.

Cadet Aaron Zender, from Salinas, California, who is a student at UCLA, found comfort in the training leading up to today’s event.

“My biggest aid was the ‘walking phase’ yesterday, where we came to this exact range,” Zender said. “Being on the same range and understanding where we were hitting our targets with live feedback really enabled us to be successful today.”

The Army training model starts with basic instruction which is considered a ‘crawl phase.’ After Cadets receive basic instructions they are given the opportunity for guided practice in a ‘walk phase’ and then expected to start performing the task during the ‘run phase.’

Cadet Keegan Coffield, from Tipp City, Ohio, has lots of experience with pop-up ranges as 11-Bravo infantryman in the National Guard. Despite his previous experience, Coffield still had to take a second to remember and apply the basic riffle skills.

“I have to take a quick second and breathe and get a good trigger squeeze to send a good round down range towards the target,” the Lehigh University Cadet said. 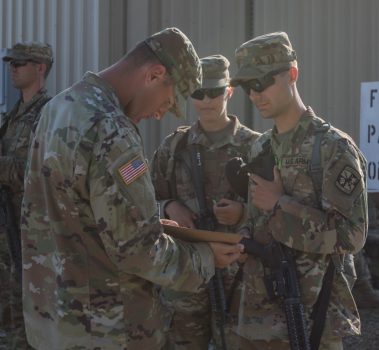 Despite qualifying, not all the Cadets were thrilled with their scores. Taking the disappointment in stride, Cadets are looking forward to improving as they continue Advanced Camp.

“[My score] was 27, I wasn’t very happy,” Kulik said. “I was shooting for a 33/34 but you get one go and that is it. Not meeting your expectations is a motivation, it motivates me to work harder and make up for what I didn’t do.”

Zender shared that common motivation with Kulik and hopes to bring this new-found perspective with him.

“It is definitely [gave] me perspective. No matter how much you train, you always need to be on you’re ‘A’ game. It is not so much daunting as it is a motivator.”

Whether they were excited for their scores or simply glad to have qualified, Cadets encourage future cadets at the range to breathe and keep everything under control.