“From the Private to the General, this is a skill that every soldier needs to know,” Staff Sgt. Richard Heinzman, a land navigation instructor, said. 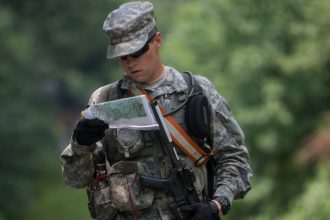 Cadets were responsible for finding at least three out of four given points in order to achieve a passing grade. While time played a part in this training (three hours to complete the course), rushing could cause Cadets to make unwarranted mistakes.

“I think a lot of it is being precise,” Cadet Connor Crago, attending New Mexico Military Institute, said.

Though it may seem pointless to learn an outdated means of navigation, it isn’t all for naught.

“If you’re deployed overseas, there’s a lot of high-tech technology that is given to soldiers these days that fails,” Heinzman said. “And if that fails then you have to get from point A to point B utilizing a map, a compass and a protractor.”

“I feel like this is good for leadership because it really helps to practice keeping a calm, level head,” Borg said. 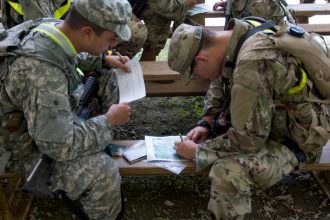 This training isn’t one-dimensional and offers Cadets confidence that they can take beyond Basic Camp.

“To be a leader, you have to be self-confident, and the land navigation, nine times out of ten, is done by yourself,” Heinzman said. “You have to have the confidence within yourself that you know the skills that have been taught today that you can go out there and you can find your points and come back and be successful.”