Basic Camp provides first and second year Cadets with the basic soldiering skills they need for Advanced Camp and for their future careers in the Army. 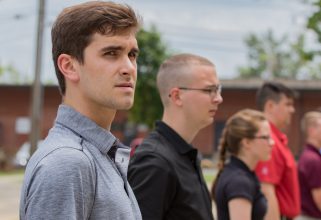 Cadets from 4th Regiment, Basic Camp, stand in a formation after arriving at Fort Knox, Kentucky, on June 6. Basic Camp gives first and second year Cadets the basic soldiering skills they need for Advanced Camp and for their future in the Army. | Photo by Reagan Zimmerman, CST Public Affairs Office

Coming into Day Zero of camp, Cadets were nervous.

“I’m a little nervous because it is my first time really doing anything like this,” University of Mississippi Cadet Matthew Vandarwater, from Nashville, Tennessee, said.

Vandarwater is in ROTC at the University of Mississippi but has never been in the field because he is not contracted into the Army yet.

Even though he was nervous about his lack of experience, he looked forward to the challenges this summer would bring.

“[I’m excited] for honestly everything,” Vandarwater said. “I have a medium fear of heights so I am excited to just go full blown at that, [but] I’m also excited for the team work aspect and to work on [my] leadership skills.” 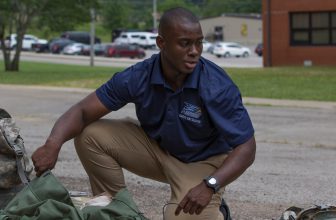 Cadet Kahlel Morman, from Georgia Southern University, unpacks his duffle bag during the “shake down” portion of 4th Regiment, Basic Camp, arrival on July 6 at Fort Knox, Kentucky. Basic Camp gives first and second year Cadets the basic soldiering skills they need for Advanced Camp and for their future in the Army. | Photo by Reagan Zimmerman, CST Public Affairs Office

Leadership was something that many Cadets were excited to learn about.

For Cadet Jewel Weatherington, from Fort Knox, Kentucky, and attending the University of Kentucky, she wanted to become more confident in her leadership.

“I want to step outside my comfort zone a little bit because I am more of a quiet person,” Weatherington said.

To gain confidence in leadership, Vandarwater believes Cadets must step up in leadership positions and make mistakes.

“I think the best way to learn how to be a leader is actually being in the leadership position [and] by taking on responsibility. So, if you make mistakes, you learn from them,” Vandarwater said.

In order to make mistakes, Cadets have to put themselves out there and challenge themselves in ways they haven’t before.

“Do it and don’t look back,” Weatherington said.