FORT KNOX Ky. — On July 8, Cadets of the 7th Advanced Camp Regiment completed Chemical, Biological, Radiological and Nuclear (CBRN) training, where they learned to trust their equipment in a chemical environment.

It was an introduction to the dangers of chemical attacks, the detection of chemical environments, and the use of protective gear. 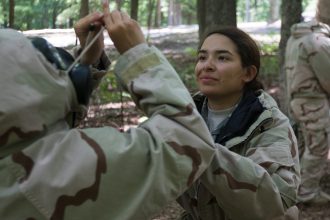 “There’s a lot to the chemical corps and it’s really hard to cover in just a couple of hours, but it is a nice little intro to what we do on a daily basis,” Spc. Joseph Workman, subject matter expert at the CBRN training, said.

A large component of CBRN training is a confidence chamber where Cadets experience what a chemical environment feels like. But before ever stepping inside, Cadets must complete a brief class in order to become more familiar with CBRN procedures.

“That’s mainly just to teach you what CBRN is exactly, and shows you the equipment you can use to combat it, and different signs you can use to detect CBRN with,” Cadet Matthew Pippins, attending University of West Florida, said.

After the class, Cadets make their way over to the confidence chamber, a daunting task for most. 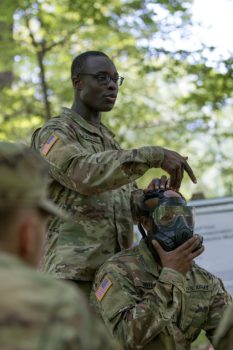 “It’s kind of like a mental thing, ‘OK. I know what I’m about to go do. I just have to get in the right mindset and just have to be confident; just have to go with it,’” Cadet Autumn Crist, attending Pittsburg State University, said.

Though the training is largely physical, it doesn’t stop there. Cadets learn leadership skills and character traits, while under the pressure of CS gas.

Crist said she will take this training with her as she completes Advanced Camp and heads towards commissioning.

“I feel like having the experience and showing Army Values in the chamber will help me express myself in other situations,” Crist said. “Confidence is huge in leadership.”