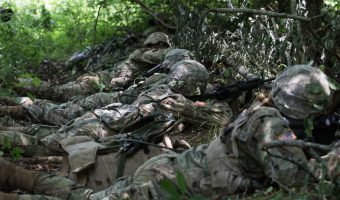 For this exercise the Cadets had a general idea of where the opposing forces (OPFOR) were coming from. They had to secure the patrol base from all angles to ensure the Cadets were able to see the OPFOR coming.

“Objective Firefly is a terrain that gives a tactical benefit to the Cadets,” Capt. Adam Ehlert, an instructor at McDaniel College in Western Maryland, said. “There task is to defend this location and reduce the strength of the enemy.”

This defense exercise is the third time 5th Regiment, Advanced Camp Cadets are going through the training. They have come a long way since the beginning the FTX Grizzly lane.

“In my opinion the mission was a success, it was better than the defenses we have done in the past,” Cadet Samuel Murphy, who attends Virginia Military Institute, said. “This operation was better compared to the second one we did because we had more observations and more security elements go out and scout the area.”

The Cadets are doing well in the FTX lanes, but they still have a lot to learn before they can complete Cadet Summer Training. 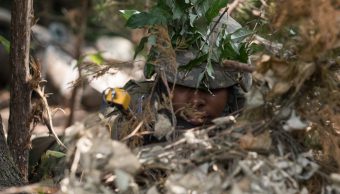 The Cadre hope that the Cadets takeaway from this experience is the importance of noise, discipline, cover and concealment, and that their actions impact a bigger mission.

“It teaches you to be in stressful situations, so even though we might not all be infantry men, we will be working in stressful environments people’s lives are on the line,” Cadet Connor Burkhardt, who attends Pennsylvania State University. “It’s important for us to get this real-world experience.”

The Cadre also evaluate the Cadets in the leadership positions of platoon leaders and platoon sergeants.

“I hope they demonstrate what they leaned with regards to tactical proficiency as well as their ability to lead and direct,” said Ehlert.