Each one of the eight lanes on the range introduced a fundamental Army tactic with a classroom component. Every lane assessed Cadets on their knowledge of the concept after a lesson taught by cadre.

The cadre at Mill Creek Range make up what is known as a Total Army Force, meaning that they represent National Guard, Reserve and Active Duty Army components.

“We [the cadre] are all leaders here in order to make the Army better,” said 2nd Lt. Jessica Mortimer, a cadre at the range. “No matter the component, everyone is a leader.”

Mortimer served seven years as an enlisted soldier prior to becoming an officer and currently serves as a military police personnel.

“Each cadre member has a unique background and Cadets are benefiting from exposure to that leadership diversity,” said Mortimer. “I volunteered [to be a camp cadre] because I want to share my experiences with Cadets and help them assimilate into the military.” 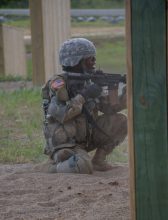 With the diversity of expertise that cadre possess, Cadets are likely to encounter a mentor who shares their desired commissioning branch. Cadet Kelsey Lebouef attending the University of Nevada, Reno has found multiple opportunities to speak with such mentors.

“I want to branch nursing corps when I commission,” said Lebouef. “We received first aid training and I got to meet an actual nurse. I didn’t think that would be possible with the high concentration of combat arms branches represented here at camp.”

While some basic camp Cadets enter the Reserve Officer Training Corps (ROTC) program with a specific idea of how they are hoping to shape their military career, others are taking things in stride.

“This is all new to me,” said Mark Horton, a Cadet at Grandin State University. “Right now, I am getting a feel for the training. I am continuing to grow.”

Although many of the basic camp Cadets are new to military life, they are in the company of competent men and women who are eager to mentor them on their way to becoming leaders who will win America’s wars.

When You Set Your Mind To It – The Burpee Challenge