FORT KNOX, KY.— “You can be so focused on what you are doing and you are not listening to what your teammate is trying to suggest to you,” Cadet Shakireah Gibbons, George Southern University.

Cadets work together to move a post across a small post and through a hard-plastic tube to complete the ‘Double Culvert’ obstacle, July 15, 2019, at Fort Knox, Ky. | Photo by Amy Turner, CST Public Affairs Office

Cadets from the 2nd Regiment, Basic Camp learned to listen and work together at the Team Development Course. Cadets were given 10 minutes for planning and then 20 minutes to execute their obstacle. If they finished their planning early they were allowed to start going through the course.

During one of the stations, Gibbons was a squad leader and felt that it went smoothly. She said what helped make it go so well was because she told everyone her plan and then she asked ideas from others.

Being the squad leader was a little outside of her comfort zone, but not too much that she did not know what she was doing.

“You need to follow first and let someone else take the lead. Everyone can pitch in, but we have to come to a conclusion on what we want to do,” Gibbons said.

At times, it was hard for her to lead when Cadets would talk over her.

Cadets work together to move post across small post and through a hard-plastic tube to complete the ‘Double Culvert’ obstacle, July 15, 2019, at Fort Knox, Ky. | Photo by Amy Turner, CST Public Affairs Office

There were a lot of leaders on her team so it was hard for some of them to step back and take orders. “Everyone wants to lead, not everyone wants to listen and they want to do it their way,” said Gibbons.

Gibbons said, “Each [course] you improve and get better because you know how to work with your squad better.” At the beginning of each new course, a new leader would be chosen, but Gibbons feels that the leader that is set in the beginning should be the leader throughout all of the courses.

According to Gibbons, it is important to “speak up, speak your ideas [and] do not just sit back and watch everyone do it.”

“In the Army, we are one big team, so being able to work effectively and communicate together under pressure is really important,” said Ryan Howell, University of Mississippi, “Especially when we are doing [Field Training Exercises] we are going to have to be able to communicate and work together to accomplish a certain mission.” 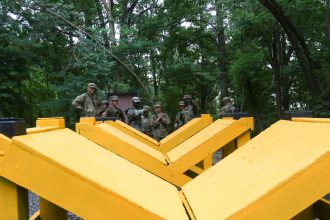 Cadets plan for five minutes before attempting each obstacle, July 15, 2019, at Fort Knox, Ky. Second Regiment Cadets were at the Team Development Course where they completed task meant to challenge their teamwork and leadership abilities. | Photo by Amy Turner, CST Public Affairs Office

Although they ran out of time and did not complete one of the courses, Howell said, “we communicated very well and worked as a team.” He feels that if his team could have moved faster and maybe spend a little bit more time planning they would have been successful.

He recommends to use the whole time to plan, because “it might save you time in the long run.”

“We have to work as a team because nobody can do [the courses] alone,” said Carlos Santosrosario, Alfred State College, “People want to get straight to their own ideas, and not listen to other ones.”

According to Santosrosario, the Team Development Course is important because, “it helps you to think as a leader to know you cannot do everything by yourself, you need your team. You need to think of the overall picture instead of yourself only.”