FORT KNOX, KY. — Obstacle courses are a staple of Army training, and for the 3rd Regiment Basic Camp Cadets, today’s training was their first taste.

Cadet Kevin Castro, University of Albany, hangs onto the monkey bar before swinging to the next one at Fort Knox, Ky. July 17, 2019. | Photo by Jacob Hempen, CST Public Affairs Office

Beaudoin Obstacle Course has 12 different obstacles and each of them serve as a starting point for the Cadets to see where they stand, physically and mentally.

Cadet India Fullard, a Washington D.C. native, noted that she had done an obstacle course at her university before but that it had been some time. Even with that past experience she found herself with her own problems.

“I did feel confident coming in,” Fullard said. “On the outside looking in, it looks really easy, but once you get on it; you realize it’s not as easy as you thought it was.”

But the difficulty she encountered didn’t keep her from facing each obstacle head on.

“My mindset was that I’m just going to push through and get through it,” Fullard said. “It might look hard but you have to get through it. 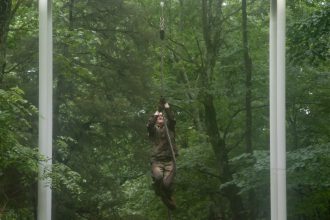 Cadet Imani Ghee, from Georgia Southern University, said that she too had a, “look forward and get through it,” attitude. However, this wasn’t the only thing that helped her complete the course.

“My battle buddies helped a lot,” the Valdosta, Georgia, native said. “We all motivated each other to keep going and never walk away.”

Going when the tough gets going is a common attitude amongst the Army, but that doesn’t mean confidence can’t waver. That’s the point where a Cadet like Kaitlyn Peters turns to her buddies for support. 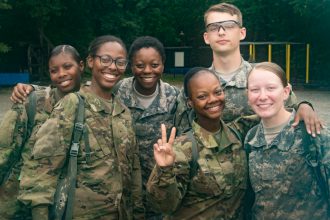 Cadet Peters, a Flora, Indiana, native, noted that she had struggled a lot in the beginning of Basic Camp, but her battle buddies were the ones that pushed her to keep trying and stick with it.

“I’d like to say I feel accomplished, but I didn’t complete the rope climb or the monkey bars. So, I’m a little disappointed,” the Indiana State University Cadet said. “But I did power through the burpees.”

Peters, like others, said she would continue to work on the areas she faltered in, and reach that bar of success.