Cadet Summer Training can be split into two major categories, leaderships development and confidence building. This training is an example of a confidence exercise. 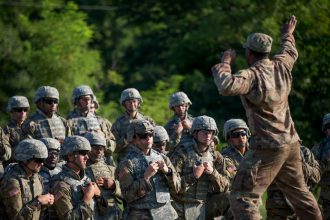 “It’s definitely a confidence booster,” said Grant Carstens, University of Nebraska-Lincoln. “You do get to hold a live hand grenade in your hand, so it’s about building confidence in yourself and the ability to throw something that could potentially blowup in your hand.”

Cadre often remind Cadets they might have to ask their future Soldiers to throw a grenade and the Cadets should be able to lead by example. A common comment heard on the range is, “If you can’t throw a grenade then how do you expect to tell your Soldiers to.”

This training is new to Cadet Summer Training and is part of an increased focus on basic Soldier skills and lethality. 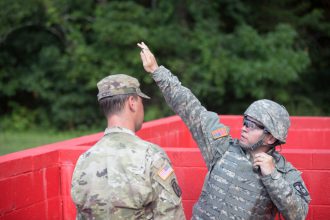 who was stationed at Fort Carson, Colorado, and is participating in the Green to Gold Active Duty program. Lee’s experience at Basic Infantry Training prepared him for the grenade range and allowed him to be there for his fellow Cadets.

“We have a few prior enlisted,” Lee said. “A lot of Cadets around us look at us and look for more advice and try to advance their knowledge. Whatever I’ve learned in the past seven years from my instructors, I try to give it back.”

Shaky hands and empty stairs are easy to find while Cadets wait for their chance to throw their two live grenades after qualifying at the mock training. Cadet Tyler Riese, Northern Arizona University, has experience throwing grenades but was still nervous.

“I’ve thrown [a grenade] once before but I’m still a little nervous,” he said, “It’s still a live hand grenade and has the ability to do a lot of damage.”

Riese said, to keep from psyching himself out he tries to remember that he will be safe.

“If you throw it far enough it’s not going to hurt you,” he said. “It’s kinda like a hot potato. You just have to push past that mental barrier and just throw it.”

Cadets from 10th Regiment will move on from the grenade range and into their two-days of buddy live fire training starting July 20.