“They’re just giving us an overview of career paths that we can choose from along with guard and reserve options. Basically, we get to active, reserve, and guard officers about what they do and it helps us figure out what we want to do,” explained Cadet Austin Pfennig, Eastern Washington University. 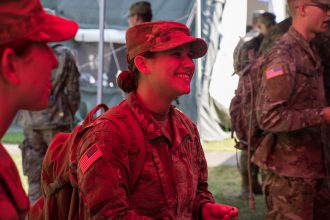 Cadets glean new information as they visit each branch’s tent and listen to the Cadre presentations.

“The knowledge I’ve known about these branches before was just surface knowledge. So, going into these tents and listening to these briefs, I’m getting more in-depth about their career paths and things of that nature,” stated Cadet Matthew Boquiren, University of Mary Hardin-Baylor.

Cadets also take different aspects of their life into consideration as they make plans for their future careers such as family and skills that can translate into multiple jobs. For some, it’s what academic opportunities are available through the branch.

“Big thing that I would consider is schools. Knowing what schools you’re able to go to because of that branch. If you want to do Airborne or Air Assault and all that other stuff, knowing if you have that time to get in there. Or, if you want to get into any of the specialty schools, knowing what branch to fall into for those schools,” said Boquiren.

One Cadet offered a piece of advice to help future Cadets push through CST.

Cadets listen to briefs and presentations from branch Cadre, who explain what the branch is and what Cadets can expect if they decide to pursue the branch. 6th Regiment, Advanced Camp Cadets attended Branch Orientation at Keyes Park, July 21, during Cadet Summer Training at Fort Knox, Ky. | Photo by Madison Thompson, Cadet Summer Training Public Affairs Office

“It’s not as bad as you think. Just push yourself through it, because there are some points you’re just going to want to quit and you’ll wonder why you did what you did,” encouraged Cadet Chris Fuller, Slippery Rock University. “In the end, it’ll be worth it and you’ll get through it.”

One Cadre member offered thoughtful and insightful guidance for Cadets as they proceed not only with training, but also through their future life experiences.

“You’ve got to know where it is you want to be in life. So, I always ask them: Where is your end state? Some people have that five-year goal, but is that five-year goal enough? Where do you see yourself long term?” prompted Sgt. 1stClass Jeffrey Carver, 316 Brigade in Fort Benning, Ga. “I try to recommend that people pick something that is going to line up with where they’re trying to end up. For instance, some people say they want to go MP corps because, when I get out, I want to be a cop. So, I recommend they talk to the police agencies to ask if they hire out of the MP corps because, from what I heard, a lot of them don’t.”

“I just try to recommend that people look at what it is that they want to do in the civilian world and check there if they’re going to accept what it is the Army does on our side over there,” continued Carver. “Have goals further out than five years or ten years. A lot of people get focused on the now. What do I like now? This is fun now? I just want to do this because I get to do this fun thing here. Again, you have to think far out. It’s a little harder when you’re young because you’re not thinking about the end of your life or the end of your career or even the start of your second career. This is just a stepping stone into greater things.”