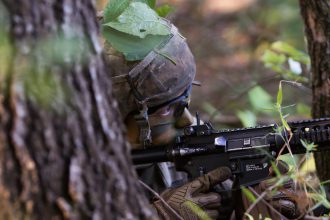 A 7th Regiment Advanced Camp Cadet establishes security for his patrol base while waiting for his orders from his squad leader during FTXII at Fort Knox, Ky., June 21, 2019. | Photo by Mary Kate Griffin, CST Public Affairs Office.

FTX II is the run phase of FTX, meaning that Cadets coordinate their maneuvers completely independent of Cadre assistance. At the end of each mission however, Cadre guide Cadets’ after-action reviews (AARs) to explain where Cadets made errors and how they can correct them in future.

“During each mission we learn something new, especially during the AARs. We take a lot from them,” said Cadet Kiera Dixon, attending the University of Louisiana at Monroe. “Our Cadre are awesome at providing guidance.” 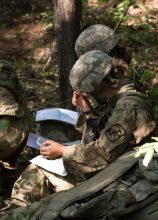 Apart from the dense forest and austere elements the FTX lanes offer, the OPFOR that Cadets must defeat are more cunning in FTX II than FTX I.

University of Tennessee Cadet Tanner Swanner explained how the OPFOR did not shy away from the element of surprise in their attacks on Cadet forces.

“The OPFOR attacked our platoon’s patrol base during the night while we were defenseless,” said Swanner.  “It was intense.”

In such cases of surprise, adaptability is advantageous.

One Fort Valley State University Cadet was able to act quickly when he was unexpectedly taken prisoner by OPFOR.

“Instead of remaining inactive while I was a prisoner, I started taking notes on the OPFOR activity I saw,” said Cadet Andrew Elias. “I gave my notes to my radio telephone operator (RTO) and had him relay the information I had gathered to my platoon.” 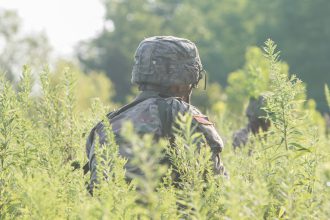 “The more I fail, the more I learn,” said Soohung.

FTX II challenges Cadets’ ability to react offensively and defensively to OPFOR. Throughout every mission, uncertainty is a factor and success is indeterminable. Learning, however, is an inevitable product which will prepare Cadets today to lead troops tomorrow.