An instructional trend in the Army is ‘crawl, walk, run’: a model that allows trainees (or in this case Cadets) to follow along as an instructor does a task, then to do the task themselves with guidance from the instructor, and finally to do the task with minimal supervision.

“If you just walk up to someone and give them a hand grenade, they’re not going to know how to use it,” Cadet Michael Johnson of Virginia Tech said. “They’re going to look at you and think ‘Oh crap! I’m probably going to die.’”

Fortunately for Cadets, Cadre members were diligent in their instructions and thoroughly explained all steps of the process. 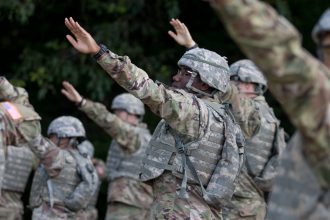 and the throwing sequence “rock back, throw.”

“We [practiced] a lot of steps,” Cadet Jared Brabson of Christopher Newport University said. “We practiced for about 10 to 15 minutes, trying to build that confidence, and build that muscle memory.”

Brabson continued by saying that the repetition was important for building confidence in yourself to perform correctly with a live grenade in your hand.

Even with training and repetition, nerves could be a factor.

“I wasn’t nervous until I started fumbling with the mock grenades and realized how difficult it can be as a lefty,” Cadet Kurt Van Steerteghem of Boston University said. “[But after the training] I definitely felt prepared. I was still a little nervous, but having those NCO’s walking you through everything was very helpful. It certainly eased the stress.” 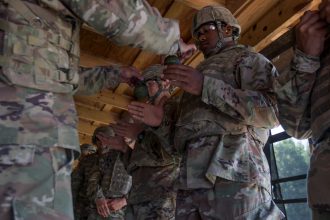 But Cadets learned to remain calm and overcome with confidence: a skill they can take with them into their future in the Army.

“The main thing is confidence,” Brabson said. “You’re holding something dangerous in your hand, and you’re in a dangerous environment, but if you’re able to do this twice in a row, then going out into the field and making difficult decisions will seem like a cake-walk.”

“Breathe in that Freedom, Cadet!”

Trouble With The BOOM!