FORT KNOX, KY. – Obstacle Courses can bring out the best and worst in people. It definitely gives Basic Camp Cadets the opportunity to practice leadership and teamwork. 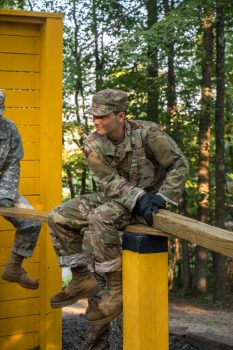 “Today has been awesome,” Cadet Thais Rodriguez, from Puerto Rico, and attending the University of Puerto Rico at Mayaguez, said. “We started a little bit rough, but it always starts rough and you get better.”

As they maneuvered their way through the obstacles Cadets started noticing some struggles.

“One of my biggest struggles so far today has been trying to hear everyone out and direct people,” Cadet Kayla Buckelew, from Pemberton, New Jersey, and a student at Valley Forge Military College, said. “We are all here to be future leaders; it is hard for some of us to work together and establish one leader.”

At each obstacle a different squad leader was selected along with some team leaders to begin the planning. In their time of leadership Cadets started to realize leadership takes more work than they may have previously expected.

“Today I have learned that everyone learns differently and everybody reacts differently to things,” Cadet Michael Vannote, from Bayville, New Jersey, and a student attending Valley Forge Military College, said. “As a team, and as a team leader, you have to realize that your team is not all one person. You may act as a unit but everyone is different.”

Whether they spent time in leadership or completed the task as team members all the Cadets learned lessons they hope to carry with them throughout their military careers.

“A good leader is motivated, they are always confident in what they do, they are brave, and they care for their team members,” Vannote said. 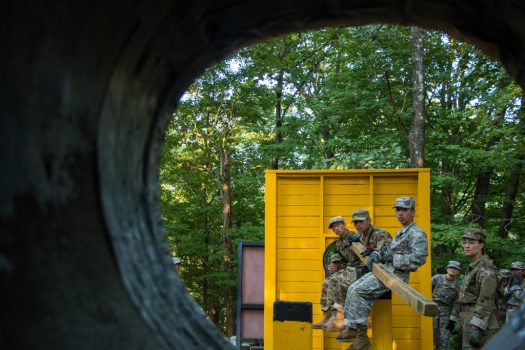 Cadets use a series of boards to cross a series of posts during the “Double Culvert” obstacle, July 29, 2019, at Fort Knox, Ky. Cadets from 5th Regiment Basic Camp complete the Team Development Course today to build both teamwork and leadership skills. | Photo by Amy Turner, CST Public Affairs Office

Buckelew learned the importance of knowing when to listen and when to speak up.

Despite varying levels of success throughout the obstacle course, the Cadets are confident in the bonds they’re building with their fellow Cadets and squad members.

“Our team is focused more on the teamwork and bonding and commitment more than failing,” Vannote said. “As long as we are working together as a team, that is the most important part.”