FORT KNOX, Ky. — Going into the field for the first time for Field Training Exercise (FTX) may be scary, but Cadre made sure the Cadets were ready. 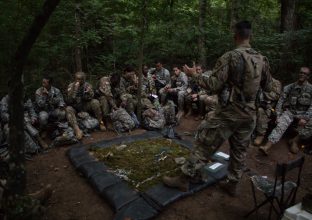 Cadre begin the day’s training by going over the basics to make sure all of the Cadets are on the same page at Fort Knox, Ky., July 31, 2019. | Photo by Jacob Hempen, CST Public Affairs

Fire Team Movement works as a refresher course for the Cadets, but also as a way for Cadre to know the Cadets know the basics like the back of their hands. That way they don’t have to worry about forgetting anything when the real test begins.

Cadet Ivan Torres, of Rowlett, Texas, noted that these basics are things he and the Cadets should be able to do automatically, and the Cadre focused on these.

“There are some things they want us to do on instinct, like holding our weapons or where we should be positioned in the different formations,” Torres said.

However, the University of North Texas Cadet pointed out that there comes a point where this could be detrimental.

“Then we get into that mindset that we can’t do anything without being told to do it,” Rowlett added. “But that doesn’t work in the field because some stuff we have to think about and make decisions on our own.”

These Cadets are all eager to show how far they’ve come, and Cadet Emily Malcom only reinforced this feeling.

While they may be new to this training, Malcom, a Jackson State University Cadet, said they are learning it quickly and getting better every step of the way.

“When you’re being told to pull security or something else, there’s a lot going through your head, like find cover, pull the right position or flagging your buddies,” the Jackson, Mississippi, native said. “I think just getting it down properly, quickly and correctly is something to strive for here.”

Cadet Lauren Pal, from Boise State University, a newcomer to ROTC as well as the FTXs, built upon this idea with how the Cadets help each other. 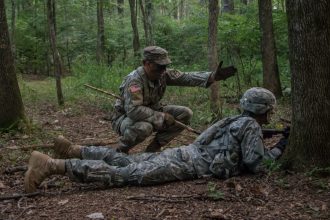 “You know; I think the lieutenants do a great job of correcting us when we make mistakes,” the Eagle, Idaho, native said. “But we will also correct each other and remind ourselves of how we should be positioned and make sure that we have each other covered. We all do a great job of keeping each other in check, and, even though we are new, I think we are learning pretty quickly.”

Cadet Tanner Blanchard, of Charlotte, North Carolina, noted that learning quickly is easier when everyone works as a team, helping each other and reaching that end goal of success.

“We’re learning a lot of leadership tactics, being able to take orders and then execute them as a unified team,” the University of Texas A&M – San Antonio Cadet said. “Because at the end of the day, we are a team and if one of us fails then we all fail.”