FORT KNOX, Ky. — After 24 days at Basic Camp, 5th Regiment Cadets took on the 10k Foot March this morning to test their physical and mental endurance.

Foot marches challenge Cadets with walking long distances at a fast pace with weight in their rucksacks.

“It is mostly mental,” Cadet Mason Aldridge, from Birmingham, Alabama, and attending the University of Alabama at Birmingham, said. “Coming out here and doing this ruck march is to prove that you can go further than you think you can.”

The Cadets began the march at 4 a.m. The purpose of this was to not only keep them out of the heat, but to also build the desire to go beyond what is required.

“It gives you the will to say I’m doing more before the sun is even up than other people are doing at eight in the morning,” Cadet Maya Lee, from Tuskegee University, said, paraphrasing and old Army commercial. “It makes you want to wake up earlier and achieve better things.”

At Basic Camp, they are taught to hold themselves to higher standards and always strive to be better than they were before they arrived here.

“[We ruck] to prepare our endurance [to lead] because leaders have to lead from the front,” Texas Christian University Cadet Brody Haverstick said.

Hum Your Song and Move Along

Ruck marches can be long, so Cadets talked about what motivated them to push through. 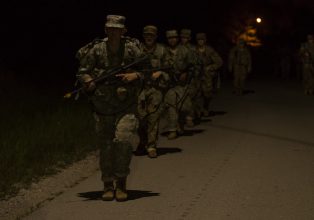 “I kind of sing to myself and think about something better at the end of it,” Cadet Tyler McFall, from the University of North Texas, said. “Singing helps you keep pace and keep pushing.”

For many Cadets, singing helped them on the march.

“It helps the ruck go by quicker. It makes you think about the song rather than the pain in your legs,” Grambling State University Cadet Robbie Sierra Jr. said.

Not everyone sings the same songs, at the same tempo or even the same genre.

Aldridge chose to sing “Dixie” and “When Johnny Comes Marching Home” because he loves Army history and believes they keep him in step better than other songs would.

“I like to sing fast pace songs, like “Danger Zone”, “Stayin’ Alive” and “I Will Survive,”” McFall said.

McFall sang “I Will Survive” to remind himself that the pain was temporary. He knew is regiment, his battle buddies and himself would persevere.