FORT KNOX, Ky. – After being trained in Army fundamentals for the past month, 4th Regiment, Basic Camp Cadets had the opportunity to engage with Cadre – and even some equipment – during branch orientation, August 4.

For most Cadets, finding a branch that interested them was not so difficult. 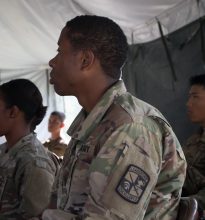 One Cadet from Norfolk State University plans to pursue a career in the medical services branch because of his passion for medicine and serving others.

“Growing up I had family that served in the medical field. I am studying medicine in school right now,” said Cadet Nathan Foster. “I loved science in middle school and high school and I want to help people by becoming a doctor. I think it would be a perfect fit for me.”

Foster is not alone in finding a branch that suits his niche interest and also corresponds with his university major. 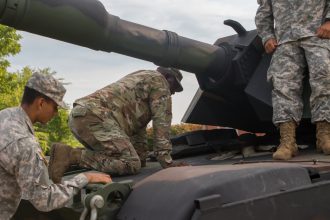 “We have gained a lot of great information and I am looking forward to the future,” said Ferrell.

Sharpe is also majoring in psychology, a field of study that has also caused her to consider a career in the medical service.

“I think both branches [medical service and military police] are awesome,” said Sharpe. “I feel that both of my majors are preparing me for a career in either branch.”

In addition to their studies, some Cadets’ civilian work has influenced which branch appeals to them.

Cadet Darius Simmons has worked in the civilian information technology (IT) field for the past six years and feels that his experiences have prepared him for the signal corps branch. 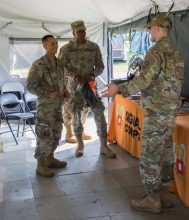 “What I have done in the IT field is very similar to what happens within the signal corps,” said the University of West Florida Cadet. “Transitioning from the civilian to military field is going to be awesome because I am already comfortable with IT.”

Another prospective signal corps officer, Cadet Roger Ball, from the University of Maryland, noted that attending branch orientation gave him deeper insight into the roles of various branches.

“The cyber, signal corps and military intelligence (MI) branches all deal with network infrastructure,” explained Ball. “If any type of network is down, then the cyber units can’t operate. Consequently, MI can’t operate because nothing is protected. It’s been really beneficial hearing how these branches are intertwined in one team with an overall objective.”

Regardless of their passions, fields of study or prior experiences, Cadets are able to find an Army branch that fits their niche.

When the Cadets go Marching in