These two phrases were a common consistency on Aug. 4 at Mill Creek Range, when 6th Regiment of Basic Camp went through the Fire Team Movement drill. 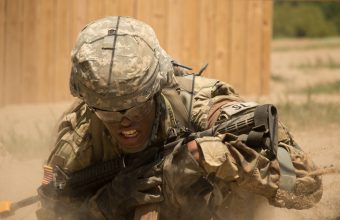 With his gun across his chest, Cadet AJ McDonald, Stetson University, crawls to the next point of cover, Aug. 4, 2019 at Fort Knox, Ky. | Photo by Matthew Barnes, CST Public Affairs Office

Similar to the Buddy Team Live Fire exercise Advanced Camp Cadets undergo, the Fire Team Movement drill requires Cadets to take turns advancing along different points of cover, with their partners providing cover fire behind them. It is performed to grow Cadets’ communication skills, increase their confidence in advancing to cover, and progress the relationships of battle buddies.

One group of battle buddies had the chance of going first, and handled the drill efficiently. Cadets AJ McDonald, from Florida A & M University, and John Bowen, from Stetson University, felt well-prepared for the challenge.

“[The Cadre] told us everything we had to do exactly down to the main point, so I felt pretty confident,” Bowen said. 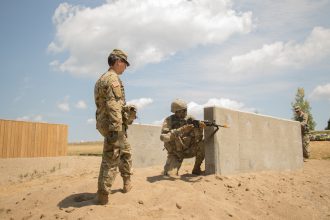 In real-life combat situations, a key element of effective fighting is trust. During this drill, Cadets had to trust that their partners had their back during moments of vulnerability.

“Without trust, it doesn’t matter how athletically gifted you are; if you don’t trust the man right next to you, you won’t get anything accomplished,” McDonald said.

Basic Camp has given Cadets enough time so far to start building the trust and bonds needed to forge strong, long-lasting teams. Both Bowen and McDonald have football backgrounds, and that common ground has drawn them closer in their time at camp. McDonald compared this drill to lessons he learned on the football field.

“Coming from that background, working as a team comes natural, because you have 11 men on the field and each man has his own job,” McDonald said. “The same thing applies to here. When he’s up and moving, I’m covering him to the best of my ability, and he’s moving as fast as he can.” 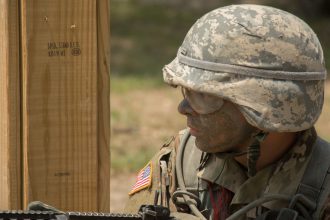 Cadet Chris Tarpinian, Norwich University, looks at the next location he is about to run to, Aug. 4, 2019 at Fort Knox, Ky. | Photo by Matthew Barnes, CST Public Affairs Office

Cadets were not completely alone during their run-throughs. Various Cadre stuck with individual Cadets and coached them through each step to make sure they were learning correctly.

“Those guys are just as essential,” Bowen said. “Without them, we might be just as clueless. They did an awesome job, and I was really happy they were there.”

Both men felt that this exercise taught them some great fundamentals and helped prepare them for similar exercises in the future.