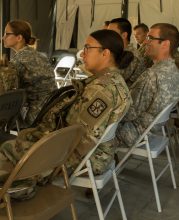 Branch orientation is an opportunity for Cadets to learn about the different branches of the Army from non-commissioned officers (NCOs) and officers in those branches. It may be the first time that Cadets are exposed to the array of potential careers available to them after they commission.

Cadet Emily Heil, attending Murray State University, decided to attend the special operations branch brief because of a pamphlet she had received.

“I am studying medicine at my university,” said Heil. “Apparently there is a need for medical personnel in the special operations branches and I didn’t know that was an option.”

Another medicine scholar from Virginia McConnell University said that branch orientation had influenced her to seriously consider an Army career in medicine.

“I was on the fence about joining the Army but after today I am leaning towards pursuing it,” said Heil. “There are many benefits including advanced schooling and classes for nurses, certifications and officers’ pay. Many of these benefits are exclusive to the Army and I am extremely passionate about nursing and medicine.” 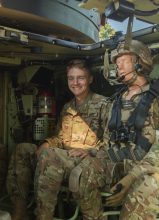 Heil went on to say how an Army career in medicine, as opposed to a civilian career, would give her the experiences she seeks.

“I don’t want to be stagnant, I want to travel. The Army can provide me opportunities to further myself in my career which is what I want at the end of the day.”

While some Cadets are not sure of which branch they want to pursue, others have been planning for the day they commission since before joining the Reserve Officer Training Corps (ROTC) program.

Tanner Blanchard, a Cadet from the University of Texas at San Antonio, said he had researched the special operations branch for a whole year before he joined ROTC.

“Psychological operations and civil affairs are right up my alley. I spent a whole year researching them before I joined ROTC,” said Blanchard. “Attending branch orientation has reaffirmed my choice to pursue them as a long term career in the Army.”

Blanchard also added that branch orientation was an opportune time to connect with people who have found success in their branches.

“Branch orientation has definitely been a great networking event. I have gotten to talk to subject matter experts who work in the fields that interest me,” said Blanchard.

Cadets discovered a newfound confidence and zest in the potential of their Army careers after attending branch orientation. Although they still have time to consider their options, Cadets now have more information and a broader network that will aid them in their branch search.