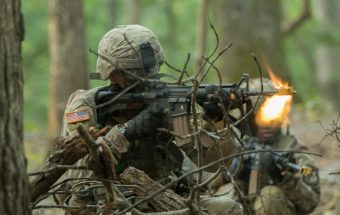 “An attack to destroy mission involves taking an objective by surprise and destroying where the enemy was placed so they can’t return and use it as a stronghold,” explained Cadet Layton Shorus, attending the University of Alabama in Huntsville.

As they approached the opposing force’s base, 11th Regiment Cadets opened fire and quickly made their way toward the objective using individual movement techniques. During their assault, Cadets sought cover while communicating with each other over the sound of blank M4 shots.

While the attack was successful in the end, there were some hiccups. The platoon leader, Cadet Kaitlyn O’Connor, detailed how her platoon was able to recover and complete the mission despite the surprises it encountered.

“Our leaders’ reconnaissance was detected because we were too loud,” said O’Connor.

The reconnaissance team was able to fall back and alert the remainder of the platoon before moving forward with the attack.

“We were able to get our support online, flank around and sweep through the objective,” said O’Connor, a University of Maine Cadet. “You can’t really plan for the unexpected. I was thinking of a few Plan B’s but none of them turned out as I had expected.”

Cadets felt confident in their overall performance and their motivation remained high after their mission’s after action review. According to one Cadet from Morgan State University, individual squad camaraderie contributed to the platoon’s success. 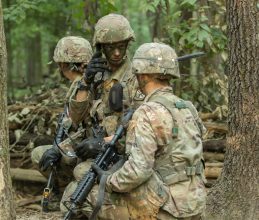 “Since we arrived here at FTX, we have gotten to know our squad members pretty well,” said Cadet Makayla Redman. “The mission went very smooth and our whole squad moved with violence.”

Becoming more familiar with each other throughout their FTX has helped to fine tune Cadets’ communicative skills and mission execution. Cadet Mackenzie Tweedy noted that her platoon’s communication and leadership greatly contributed to its swift attack.

“Our communication was on point and everyone was able to fire after being set,” said Tweedy, a University of Arkansas Cadet. “The leadership knew what we needed to fix from our previous missions and their key task was to fix those things. They really wanted to show the platoon it could be done.”

Each FTX mission is designed to simulate a tactical situation and give Cadets the opportunity to utilize the training they have received in order to achieve the given objective. Communication is key and tactical agility is a must in order for Cadet’s to attain victory.