Around two months before he left for Advanced Camp in Fort Knox, Kentucky, the Michigan State University Cadet decided he wanted to break the world record for the number of burpees done in 12 hours. Five days before arriving in Fort Knox, he did just that. Abell completed 4,689 burpees, breaking the world record.

Why did he do this? Because he knew he could. 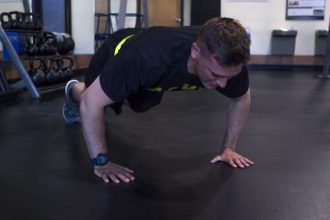 Cadet Bryan Abell, from Michigan State University, completes a burpee during a workout on Aug. 16 at Fort Knox, Kentucky. Abell broke the world record for the number of burpees done in 12 hours by doing 4,689 burpees. | Photo by Reagan Zimmerman, CST Public Affairs Office

“Once I had it in my head, I wanted to prove to myself that I could do it because I had a lot of people who told me I was not going to,” Abell said.

He took that drive and decided to use the event to raise money for a non-profit organization he founded with his sister, Katelyn.

Earlier this year, the siblings founded the Stronger Warrior Foundation. Their mission is to keep active and retired military personnel, and their families financially, mentally and physically healthy.

Currently, donations are still being made and the total is close to $7,000. All of the money raised will go to military families in need.

Through this, he learned about how to maintain a strong mentality.

“The hardest part was mental toughness. Every day, I went for an hour to two hours in the morning and night with training,” the Milford native said.

Abell ran ultra-marathons, 50-mile races, so he was used to training for endurance, but training for this event tested him unlike anything else.

Cadet Bryan Abell, from Michigan State University, completes a burpee during a workout on Aug. 16 at Fort Knox, Kentucky. Abell broke the world record for the number of burpees done in 12 hours by doing 4,689 burpees. | Photo by Reagan Zimmerman, CST Public Affairs Office

“I have done a lot of physically rigorous things before this but none of them were quite like this,” Abell said. “I thought I pushed myself to a point where I was at my max [before] but I figured out that was not my max. I learned that I could do a lot more than I thought I could do.

Abell took what he learned about himself to Advanced Camp this summer. He knew how to push himself and that ultimately carried him through the 37 days of intense training.

Looking back on his training for the world record event and his training at Fort Knox, he was proud of what he accomplished. He pushed himself to never give up, even when the training was tough and he felt like quitting. But, he knew that he couldn’t quit.

“I wanted to be able to prove to myself and others that I could do it,” the Michigan State University Cadet said. “I did all the training so if I quit I wouldn’t have been able to live with myself.”

In the future, Abell wants to challenge himself yet again by breaking the 1-hour and 24-hour burpee records. He also wants to branch infantry and attend Ranger school.

“You are only as good as your last day. Everything I have done until now, it could be nothing if I wake up tomorrow and quit everything,” Abell said.