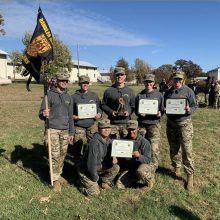 Chandler Bullard and fellow Cadets pose for a picture.

Cadet Bullard is an exceptional Cadet, and this was reflected in her recent selfless actions.

Cadet Bullard is the Rambler Battalion Commander, a Distinguished Military Graduate, and a two-time member of the champion Bataan Memorial March Team, but still stepped up to the plate when her team needed her the most.

The day prior to the Task Force Ranger Challenge, one of the primary members of the team had to step down due to a family emergency. With close to no time left to find a replacement, Cadet Bullard canceled her weekend plans and stepped up to join, helping to lead the team to first place.

Furthermore, Cadet Bullard made the decision to remain on the team and compete in the Brigade Ranger Challenge, despite it conflicting with a planned vacation. During the competition, Cadet Bullard yet again helped her team place third in the entire Brigade, which was a first in their program’s history!

This act shows more than just volunteering when your team needs help. It proves that Cadet Bullard will always selflessly set examples of excellence so others may rise to the standard, and that’s what makes her a strong leader.

“Moreover, [Cadet Bullard] knows how to successfully balance several complex life roles and does so almost effortlessly, with a smile and unflinching character, and always to a high standard of excellence.” –  LTC Nicholas Bugajski

I originally decided to join ROTC because I enjoyed the military environment I was raised in. My dad went through AFROTC and served for 20 years, and I really looked up to him. That intrigued me enough to join, but I stayed in the program after I experienced the culture of family within the program and how everyone was always pushing me to become better.

I am motivated to become the best leader I can be because I’ve seen how important good leadership is. There were a few amazing leaders in the class before me that inspired cadets to excel and created a ripple effect of excellence within our program.

I strive to be a good leader so that I can positively effect the program and as many other cadets as possible.