When the Cadets of 8th Regiment, Advanced Camp, arrived to the Warrior Skills training site on Thursday, July 1, the excitement could be felt in the air. Smiling faces bounced around scouting every inch of the green military tents in the distance.

For the Cadets, Warrior Skills is the first hands-on training event of their Cadet Summer Training, and the place where they learned to save lives and provide indirect fire support for ground troops.

Cadets started the event by receiving a mandatory safety brief from the Cadre staff and later split into platoons to challenge the Call for Fire lane and the Tactical Combat Casualty Care or TCCC lane. Combined, Call for Fire and TCCC make Warrior Skills.

After breaking up into even smaller groups, Cadets first receive a refresher course pertinent to their lane. They also had the opportunity to ask the Cadre the tips and tricks of the trade before being tested in their competence to perform the skills they learned.

Cadets Rafael Mas, Virginia Military Institute, and Austin Zirkel, Sam Houston State University, decided to lead from the front and were the first team to qualify on the Call for Fire lane for their group.

“It was pretty exciting, this is the first event we’ve done and we decided to go first,” said Zirkel, “I think it helped us a lot because we were able to kind of set the standard and also get a feel for ourselves and not just watch other people.”

With the Army’s return to large scale ground combat operations, the skills Zirkel and the other Cadets learned will ensure ground troops can receive indirect fire support in a safe and successful way.

Meanwhile on the TCCC lane, Cadets learned how to save lives by practicing on a Rescue Randy mannequin. The goal of the lane, is to teach Cadets how to provide first aid while under fire and the proper use of each of the items inside their Individual First Aid Kit, IFAK.

“I can put a band-aid on somebody, but this is the first time I’ve actually dealt with more tactical field care,” said Rachel Eickhoff a Cadet from Iowa State University.

After qualifying in both lanes, Cadets are now ready to move on and face off against the remainder of CST ’21. 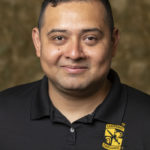