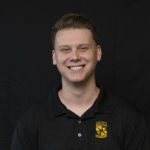 Jackson Huston is a videographer for the Cadet Summer Training Public Affairs Office internship. He is a rising senior at the University of Kentucky, majoring in broadcast journalism with a minor in creative writing. During the school year, Huston produces packages for the UK Student News Network. After college he plans to get a job writing entertainment journalism. Huston loves nothing more than telling a good story. He plans on using his skills to become a screenwriter for film and television after he has proven himself as a journalist. In his free time, Huston enjoys watching movies and playing with his dog, Jojo.

Being a Cadet is not a Walk in the Park