“Pura Vida!” This Costa Rican phrase was the theme for our CULP 2012 deployment in the tropical rainforest. The literal translation of this saying is “Pure Life” but as the people of the country explained and exemplified, it isn’t a saying to be understood intellectually, it’s a saying that can only be lived. “Pura Vida” is lived by embracing life in every pure moment one is blessed to have. As we lived in Costa Rica for three weeks on our mission, our goal was to immerse ourselves into the culture as purely as possible.

During our time there, our primary objective was to work with the elementary and high school students in various parts of Costa Rica. In the city of Las Lomas we worked with the local elementary school by doing facility maintenance and upkeep. In the high country of the tropical rainforest frequent rainfall and constant humidity can cause buildings and structures to rapidly deteriorate if they are not continually maintained. The principal of the school, Carlos Escaban, told us, “It is necessary that every six months we evaluate the building in order to spot any growing mold, termite colonies, or areas of concern caused by the weather.” So it was our first priority to go through the facility and address these potential problems and hazards. 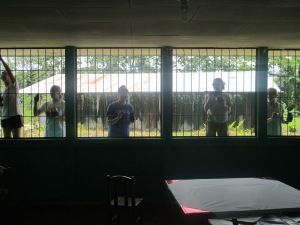 (From the left Cadets Berndt, Roach, Gillespie, VanDerLught, and Tutela. helping on the restoration of the school. Photo by Cadet Padilla, L).

While we were assessing the school and its surrounding areas we also learned from Carlos that the school is not funded by the country or city but out of pocket from those in the community who are willing to help out.  With that we decided it was time to get to work and help provide a better environment for not only the students that go to the school but also to help enhance the community as a whole.  Carlos Escaban and EARTH University provided us with the necessary tools and supplies to work on the facility.

While we painted, plastered, and repaired the school the students attended their regular classes and daily routines. During their breaks, we would take our breaks in order to have an opportunity to start building a relationship with them.

Another area of aid we provided for the local school of Las Lomas was reforestation of the area surrounding the school. The area on which the school was built was previously farm land used for cattle. Most of the large vegetation had been uprooted long ago in order to clear the land for large livestock. So to help restore the land to its natural beauty we replanted a variety of trees and vegetation to begin the restoration process. 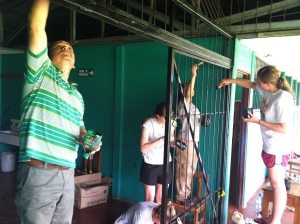 (Left) Cadets Tutela, Hedden, VanDerLught, and Roach along with Geraldo, our driver, who helped with the project. Photo by Cadet Padilla, L).

The local farmers of Las Lomas showed us what damages the surrounding area suffered from the less than considerate farmers of the past and worked with us to undo their devastation. They showed us once beautiful landscapes marred by small landfills and instructed us on how to safely and sustainably restore these areas for future growth to occur. It was the pleasure of Cadets Taylor Denno, Christopher Aultman, Leonardo Padilla, and Caleb Curreri to work alongside the local farmers to help make the school grounds that much more safer and environmentally friendly.

While our mission was to help the school and Carlos Escaban, he helped us in return by teaching us games and activities we could use to better engage ourselves with the students. The games and activities we learned focused on teaching the children English and bridging the gap from any cultural or language barriers, which in return helped all of us with our Spanish.  As the days ensued, we forged unique relationships with the students that transcended the limitations of our language and cultural differences. When the time arrived for us to move onto our next assignment, we left the students with mixed emotions and cherished memories.

(Left) Cadets Berndt, Curreri and Roach, interacting with teacher Carlos Escaban and some of the students from Las Lomas School. Photo by Cadet Padilla, L).

Cadet Morganne Hedden noted, “Leaving the area of Las Lomas was more difficult for me than initially leaving home for Costa Rica.” This type of sentiment was commonly shared by the entire group.

When we left the school, our next task was to actually help benefit the city as a whole of Las Lomas.  We were sent on a trail that led to a local waterfall and were told that it needed to be built up and restored. 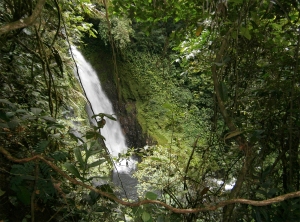 (Photo of the waterfall in Las Lomas. by Cadet Brendt, L.)

The reasoning behind why we needed to build up and restore the trail was that the community is planning on using the waterfall as a tourist attraction to create and sustain an economic status.  With this in mind, we began digging up unnecessary roots, building steps, and overall making the trail a safer hike for those who are not as physically capable as the locals themselves who are used to navigating the terrain of the rainforest.

At the end of the day, our efforts were rewarding with seeing the waterfall itself and enjoying the sights that captivate the locals attention on a daily basis.  After all of those individual missions in Las Lomas it was time to move ahead and drive on to the city of Sequierres where we find an equally rewarding experience.

The next destination on our mission brought us to the city of Sequierres where we intended to work with a local technical high school alongside the Access Program. While working with the Access Program, we were responsible for helping the junior and senior aged high school students complete cultural projects on American culture and community outreach programs in their own city. This provided us an opportunity to represent America to a generation of Costa Ricans whose primary impression of our country came in the form of MTV and VH1, according to various students. As we explained to them what a typical American high school experience is like, they shared with us the daily routine of what their high school lives entail.

The other unique experience we had with the Access Program occurred during our participation in their community outreach program. The professor’s class was divided into five groups and he assigned two of us to each group. From there we worked with our groups to solve one of the numerous problems plaguing the city. The students showed us what problems existed in their neighborhoods and we helped them devise a plan to begin to resolve the issue. We continued to then implement the plan and teach the rest of the class about our project. In particular, one group decided to form a petition to get the garbage companies to visit the city more than once a week as well as providing recycling capabilities to all citizens in order to have a more sustainable community. In our time spent with the high school students of Sequierres, we felt the Costa Rican culture at the most natural and genuine level on the entire trip.

After we completed our main mission in both the cities and learned a little bit more about ourselves along with what the culture of Costa Rica truly is we all would have to agree that it opened our eyes to how much we have to be thankful for.  Not only for what we have here in the United States but for the continuing support of Cadet Command and the Army as a whole.  Without their efforts and continued support we would have not been able to complete our mission or had even been able to be presented with such an opportunity that everyone in our group could agree which was absolutely life changing.  Needless to say, our mission was completed and we had a complete sense of unit cohesion and what it means it will mean to be an officer in the United States Army.

This story was written by: