In my year working with Cadet Command, I have had many opportunities to talk to Major
General Christopher Hughes in passing. I was lucky enough to hear him give several speeches, both at Cadet Summer Training and outside of CST at various events at Fort Knox. Not only is he an immaculate speaker, but he is also down to earth and genuine; he cares greatly about his command and the people in it, no matter how small their role. I knew that I had to have a sit-down interview with him prior to his retirement and change of command.

The following are highlights from the interview. Watch the full interview here. 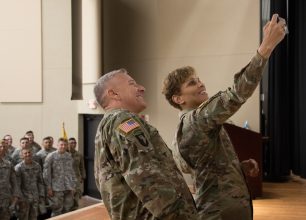 Q1: How did you make the choice to join the Army?

A1: I was a military brat. My dad was a NCO in the United States Air Force so I was familiar with military life. But one day I was walking across campus and a CH47 Chinook helicopter flew over campus and had caught a lot of attention as six people in military uniform jumped out of the helicopter and into the pond on campus. As you can imagine, that wasn’t a normal thing to see on a college campus. That’s what motivated me to do it, but as I tell the cadets at that point in my college career, I was working six jobs to put myself through school. The idea that there could be a scholarship enticed me.

Q2: What was it like to be Cadet when you joined ROTC?

A2: It was not very popular in the early 80s. We were at the end of the Vietnam era, and just a
few years before, that ROTC Cadets wouldn’t wear their uniform on campus. But in 1981, the
Iran hostage crisis created a new fervor for nationalism and as that hostage situation drug on
suddenly being in the military was seen as a positive attribute and the program was suddenly
funded under the Reagan administration. There was a core group of people that I met that I
respected, and I saw that there was something bigger than myself or being popular, and I was attracted to that.

Q3: As your own experience as a Cadet, then having watched your sons go through the
program, and now you’re the commanding general of Cadet Command, how have you seen that experience change over the past couple of decades? 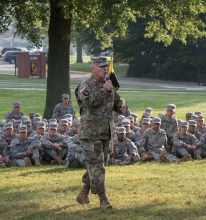 A3: The experience has changed significantly. When I was growing up we operated in what was called a resource constrained environment. What that did for people in my generation is that we took care of what we had, we weren’t keen to seek better things, we made things last a long time. Then when 9/11 happened, it was about my 18 th or 19 th year, we were flush with resources and people. But I slowly learned that that didn’t teach people to be good leaders. It didn’t lead itself to people appreciating the things that they had and how to take advantage of those things. Now what I have seen right at the very end of my career, is that were going back to that drawn down, resource constrained environment. The means to teach young men and women how to be agile, adaptive, and innovative is important again.

Q4: What has been the most rewarding thing of being the commanding general of Cadet
Command?

A4: Well first it keeps you young. But it gives me the opportunity to work with young men and
women and give them an opposing view on how to look at the world.

Q5: How have you seen the opening of combat arms and specialty schools, such as ranger
school, positively affect Cadet Command? 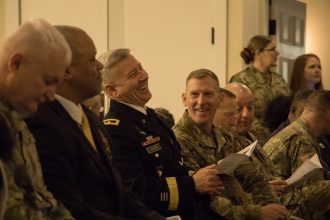 A5: I had one officer and three linguists working and embedded with me during the invasion of Iraq. One of my linguists, Spc. Carr, was incredible. She was a real asset to me in a country where you couldn’t even see women. I had worked with women in Haiti as linguists and MPs. Although I’m an infantryman, and it’s a male centered job, we always integrated women in for different jobs. As in an infantryman, to me, it was intuitively obviously the right next step. In fact, we’re tracking now that we have four ladies from ROTC and eight West Pointers who are Ranger qualified and I think our numbers are going to increase as we advocate for it. To me, gender doesn’t matter, as long as you can do it, if you can carry your weight and be value added, then go for it. Don’t let someone tell you that there is a glass ceiling because there is no such thing. Glass ceilings exist based on policy that the Army cannot control and limitations that individuals place on themselves.

Q6: In your book, you reflected on your time with your driver Spc. Bowers in Iraq. You wrote, “I took the time to reflect on how my command burdens were eased by the skills, drive, and
initiative of each of my men.” How is this statement more applicable now that you have a larger command and a much larger staff?

A6: There is no way I could do anything without the support of the people in this room and that front office staff. And guys like Spc. Bowers help us stay sane. There is always somebody who has the compassion to think about the Commander. In this job I have that every day.

Building Leaders Through The Grade Sheet