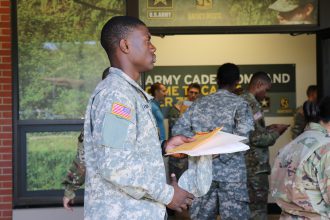 FORT KNOX, Ky. – Cadets from the 1st Regiment, Basic Camp went through in-processing at the Copple Center on June 6.

The process checks out Cadets’ documents, as well as their financial and travel information, including whether or not family members will be attending graduation and related information.

2nd Lt. Brian Coleman explained that the Cadets’ finances and pay are set up during in-processing so that they can get reimbursed for travel to and from camp.

Cadet Dustin Axarlis, a student at the University of Dubuque from Newmanstown, Pennsylvania, stood near the front of the line for in-processing.

“It’s a lot of hurry up and wait, but you have to do it – just stay motivated through it,” said Axarlis, noting that he wants to learn how to better work with other cadets while at camp.

Coleman’s advice for Cadets at camp is for them to try to stay positive and motivated.

“Come willing to learn,” said Coleman. “It’s a lot of information they’re going to learn at Basic Camp that they can take on to the next level and use for the future in the Army.”

Cadet Blanca Beltran, a student at the Virginia Military Institute, was previously in the Marine Corps Naval ROTC before switching over to Army ROTC.

“I like the law,” asserted Beltran. “If I go military I would like to do Military Police and enforce it, but if I go into the civilian world I would like to be a state trooper or an immigrant lawyer.” 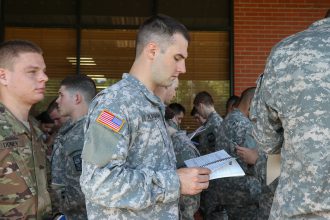 The Houston native articulated her hope to learn time management and team building skills, as well as how to become a leader.

Cadet JulieAnne Martin, a student at Muhlenberg College from Lafayette, California, expressed that she is eager to enter into ROTC for the first time with no prior experience.

“I’m excited. This is something I’ve always wanted to do,” stated Martin, adding that she wants to gain more experience as a leader and learn how to communicate, work, and cooperate with others.