FORT KNOX, KY – On June 6th, Basic Camp Cadets with 1stRegiment arrived at reception. As the Cadets exited the bus, they were instructed to not step on the grass while making their way to first formation. Sgt. 1stClass Otero stated, “If you are stepping on the grass, it symbolizes that you cut corners in your work.” The Cadre want to prepare these Cadets for success, by teaching them to go the extra mile. 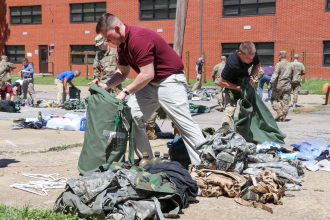 The Cadets began a layout of all their belongings, and were checked for contraband. They also had the opportunity to check in valuables for safe keeping during their training. They were then marched inside where their prescription medications were confirmed and approved. The Cadets also completed medical forms that ensured the Cadets were up to date on vaccinations and safe to train.

While standing in line, some Cadets began learning about important elements of Army life, such as simple drill and ceremony. They were instructed to stand at parade rest, then snap to attention when necessary to move forward in line. They also learned important customs and courtesies, such as addressing enlisted and officers properly when speaking and being spoken to. 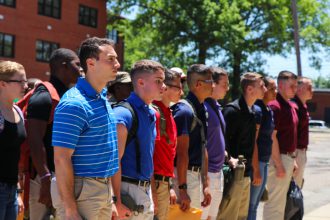 There were also senior Cadets who were assigned as assistants to the basic camp Cadre. Their priority during reception was to offload and sort the incoming Cadet’s bags from a box truck. Soon these senior Cadets would be working alongside Basic Camp Cadre, helping teach Basic Camp trainees the keys to being successful leaders and grasping basic Army knowledge. Cadet Nick Cooper, from Western Kentucky University advises future Basic Camp trainees to, “Keep an open mind and be a sponge for information, and try to make the most of every opportunity.”

These new Cadets attending Basic Camp are making their first foray into the Army life and are laying strong foundations to be successful as future leaders.