FORT KNOX, Ky. – Cadets come to Fort Knox to give it their all, but Fort Knox summers are historically hot and humid. With that in mind, Cadet Summer Training (CST) Leaders held a mass casualty evacuation exercise on Friday, June 1, to prepare for the upcoming 12-mile ruck march, a must-pass event for advanced camp cadets.

How Cadets do during training will determine where they finish on a national merit list, so many of them will push themselves to extremes, explained CST Chief of Staff Col. Scott Sonsalla, who observed Friday’s exercise. 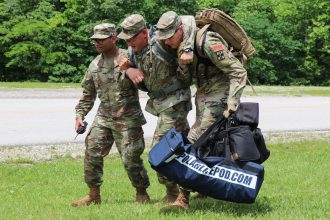 “When you hit that heat cat [category] 5, and they’re not properly hydrating, you’ve got an increased risk for potential injury,” Sonsalla said.

Heat category refers to the relative risk due to weather conditions. Heat category 5 is the most extreme, with temperatures exceeding 90 degrees Fahrenheit.

“One of the things we don’t ever want to do is injure soldiers, and then not be prepared to handle that.” Sonsalla continued. “So, today, we are going to simulate a foot march in the heat of the Fort Knox summer, and these [simulated] Cadets will be evacuated for different degrees of heat injuries or heat illness.”

Three stand-in Cadets lined the grassy shoulder of the road by Morgan Reiley Rifle Range, one pretending to be unconscious. For this scenario, Sgt. Stefan Bankert was one of the medics in the back of the trail vehicle. The vehicle monitors how the Cadets are doing from behind to respond quickly to injury.

“Once they go down, then I come out, start triaging them however they need to, then start treating accordingly,” Bankert said. “From there, we have another aid station coming out.”

“Someone having a fatal [injury] or anything from heat injury is almost inexcusable in my mind,” Bankert said. 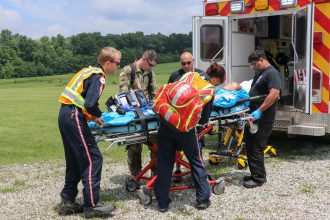 Cadre and emergency services work together to evacuate a fallen Soldier during medical evacuation training on June 1, 2018 at Fort Knox, Ky. (Photo by Emily Peacock)

Bankert and his team started treating the downed Cadets, placing a wet towel on the one unconscious. They placed the unconscious Cadet into a Polar Life Pod, and filled it with water. The Polar Life Pod, a “new portable immersion system to assist in the cooling of athletes on the field,” according to Polar Product’s website, is a new addition to the medical team’s existing procedure.

The team loaded the Cadet in the back of an ambulance for immediate medical treatment until the weather changed, which would permit an aeromedical evacuation via helicopter.

First Sgt. Gerson Jimenez had hoped weather would permit practice with the medical helicopter, so their medical team would be ready.

“For us, it becomes a part of muscle memory,” Jimenez said. “The more we train, the better we get at what we are doing.” 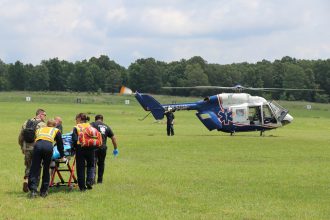 Cadre and emergency services work together to evacuate a fallen Soldier during medical evacuation training on June 1, 2018 at Fort Knox, Ky. (Photo by Emily Peacock)

Soon, the clouds broke to an open sky, and a helicopter dispatched. The team wheeled the simulated Cadet strapped to a stretcher to the helicopter, and took off. If this were a real event, she would have been evacuated to a nearby hospital in minutes.

“We’ve got to be able to get them out of here, and that does a couple things,” Sonsalla explained. “It saves the Cadet, and it reassures them that the systems we have in place are there for training and long term.”