FORT KNOX, Ky. – The morning of June 9 greeted the Cadets of 1stRegiment Advanced Camp with the promise of staggering heights, challenging obstacles, and opportunities to take vital steps towards becoming the Soldiers they aspire to be. As the Cadets tackled both the Rappel Tower and Confidence Course, their mental and physical will-power were tested. 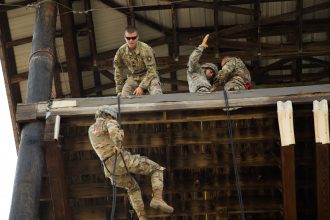 The Cadets initially received a safety briefing followed by an explanation on their challenges for the day.  They were then divided into two teams, with one half heading to the tower to be fitted for their swiss seat rappel harnesses and the others marched back into the woods to confront the obstacle course.

Those who were up first at the Rappel Tower were faced with a daunting 64-foot vertical drops that could unnerve even the highest thrill seekers. Before attempting the large leap of faith, Cadets were required to complete practice bounds along the 20-foot slant wall. After negotiating the 20-foot wall the Cadets move to the 64-foot tower where they have to conduct two successful rappels.  First off of the walled side and then off of the 64-foot free fall side that simulates rappelling out of a helicopter.  If they are successful, the Cadet is finally rewarded with an “X” on their helmets, signifying their triumph over the intimidating tower.

On the other side of the training site, Cadre such as Sergeant S. Symone Williams prepped the Cadets on how to safely and successfully maneuver their way through the Confidence Course. “Each obstacle was designed to physically and mentally challenge the Cadets in a variety of ways; everything from team building and problem-solving skills, to hand-eye-coordination and overcoming their fears of heights,” Sergeant Williams stated.

The course includes obstacles such as the “Tough One,” consisting of a rope climb, ladder crawl, and a steep rope wall descent. The next eight courses continue to test the Cadets’ mettle.