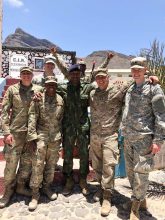 U.S. Army Cadets deployed to Cape Verde in the Cultural Understanding and Leadership Program (CU&LP) to gain new perspectives on the people and history of Cape Verde and stronger cultural skills.

The Cape Verde islands are about 400 miles off the western coast of Africa, with the official language being Portuguese.  Cadets in this country did service projects with schools and orphanages, community engagement, and Military to Military training all in an effort to maintain a good relationship with the Cape Verdean people and Military. 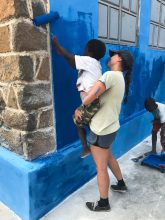 Cadet Krawiec helps a student reach higher along the wall to paint the final coat.

“At some points, I would have one of my Cadets, Cadet Alvarez who spoke fluent Spanish, be an in-between to be able to get the message across,” Miller recollected.

Cadet Mariah Alvarez from University of Arkansas used the similarities between the two Latin-based tongues to her advantage.

“I understood [Portuguese] more that I spoke it,” Alvarez said. “[Plus,] if I spoke to somebody who just spoke Portuguese, they kind of understood me as well.”

The message sometimes had to be translated into Spanish, then into Portuguese, then, on a few occasions, into Creole. Messages in this linguistic game of telephone had to be short and simple to not lose meaning with each translation. This is just one of the challenges Cadets learned to manage while operating in a foreign country.

Staff Sgt. Armando Gonzalez, 10th Mountain Division, pointed out other cultural differences. Gonzalez explained that they have a more relaxed concept of time. Their cultural norm is to not overburden themselves with strict schedules.

“If we say a time, we will be there probably that time or earlier,” Gonzalez noted. “For them, they give you a certain time, and they’ll probably be there about an hour later.” 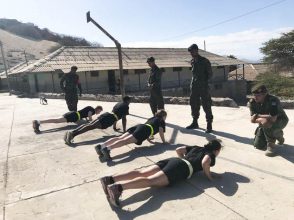 Team 1 completes the Cabo Verdean Basic Trainee Physical Fitness Test on May 16, 2018 in Mindelo, Cabo Verde. The Culteral Understanding and Leadership Program is designed to broaden the Cadet’s experience as they traing to be future Army leaders.

The Cadets did Military on Military interaction and went through basic training, PT tests, obstacle courses, and weapon and aquatic training.

“Going in, I was expecting their military to be a lot less than what they were…, but on the backend of that, [they] completely changed my mind.” Gonzalez said. “They are very well motivated, very determined and dedicated to be part of their military.”

The PT tests and basic training were physically demanding, Alvarez added. “I wasn’t as prepared for it as I thought I was, because they were really tough.”

It’s all about service. 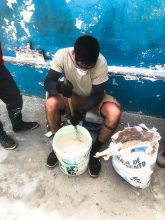 Cadets and local citizens repair and paint the local school on May 21, 2018.

With visiting an orphanage, painting a school inside and out, and working with their Boy Scouts, the Cadet’s main goal was community service.

Cadet Edmond Strickland from Auburn University had a lot to say about the service projects.

“While camping with the Boy Scouts, the CULP team had a health fair at a local school,” Strickland told. “We were giving out toothbrushes and toothpaste, and teaching them how to do first aid,”

Cape Verde has very limited access to medical training, so “some of our Cadets in medical courses … [taught] students and teachers how to specifically tailor [medical services] to their environment in Cape Verde,” Miller explained.

The experience our Officers need.

“It was definitely the first time where I was in a situation where, I might be in a crowd of people, but I knew what no one was saying,” Strickland remembered. “It was the first time that I felt different and alienated.”

Miller explained that the Army can only teach Cadets so much in a limited amount of time. It is crucial that they learn to navigate cultural divides through observation and interaction. Programs like CU&LP help Cadets learn to question their actions before they make serious cultural Faux Pas. It’s all about learning to think for themselves and to prepare for that cultural difference, so they don’t insult anyone.

Miller didn’t hesitate to explain why CU&LP is crucial for the U.S. Army Cadets.

“It’s simple. These are the things that they are going to experience when they go overseas for deployments,” Miller said. “This is like a free dry run for them.”

Around the world and back again