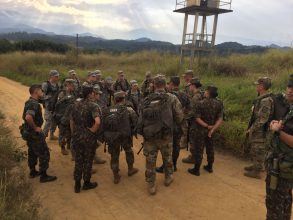 Patrolling Operations – ROTC cadets gather around to discuss an after-action report after practicing the “Cascade” method of breaking contact in a platoon operation.

“We started out in Rio de Janeiro,” Matchett said. “We spent a lot of time going to museums and there were a few forts that they used to use during battles that they turned into museums.”

While focusing on learning from and about Brazil and the Brazilian Military, CU&LP Cadets participated in fun and bond forming activities with Brazilian military personnel according to Cadet Madison Beasenburg from Clemson University. 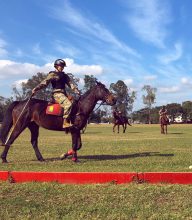 Cadet Rosie Probst, University of Georgia, receives instruction in Polo during Equestrian Training with the Calvary cadets at AMAN.

“We also try and strengthen the bonds between our Cadets and their Cadets and also their senior officers,” Beasenburg said.

The experience was ripe with lessons to be learned according to Cadets. According to Hunter Coppinger a Cadet from Middle Tennessee State University learning about how the US Military and the Brazilian Military are different was a key takeaway.

“Their Cadets at AMON, the Academia Militar das Agulhas Negras, similar to our West Point, really had more respect for their Officers and their Cadets and treated them in a higher level,” Coppinger explained. “They had a whole Brigade of enlisted that stayed at the academy and supported the whole academy. When a Cadet walked up to one of the soldiers they where treated just like an Officer, no difference.”

Many Cadets expressed issues navigating the communities and stores in Brazil due to their limited foreign language skills, but some Cadets faced the challenge and provided a service to their teams. 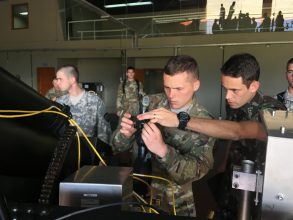 Cadet Joshua D’Andrea, University of Portland, makes adjustments to the M114 Howitzer at the Artillery Simulator at AMAN.

would be able to use his Spanish background but was placed in Brazil instead. When he learned where he was going to be sent he started working on his Portuguese which worked in his favor.

“We were at a lunch where the Brazilian officers didn’t speak English,” D’Andrea said. “Myself and some of the other Cadets who spoke some Portuguese, we talked with the officers the best that we could, exchanging processes about becoming doctors and lawyers in our militaries and that helped us because we learned things about that military that we wouldn’t have, because of the language barrier.”

D’Andrea was also among the Cadets asked to give a brief at Academia Militar das Agulhas Negras in the largest auditorium in South America. 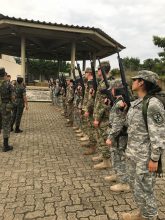 ROTC Cadets conduct a function check on their FN FAL rifles before beginning patrol base operations training with the Infantry cadets at AMAN.

task any of us had ever done and we were really scared, but we went out and we did the best we could. ”

Coppinger highlighted the importance of CU&LP. Explaining how patience when working with local foreign communities is key and how it is important to understand and respect the socio-political structure and struggles of the times.

“On our trip the lifeline of the nation, the semi-truck drivers, had a strike that affected our team because some of the places we were staying we couldn’t get supplies,” said Coppinger. “So being able to relate to that when we go down range as new lieutenants really gives us an edge as far as being a new officer and being able to accomplish a mission effectively, now that we do have a background and overseas experience.

The process of applying for CULP can be a lengthy one made longer by the required paperwork of those who get in the program. However, Beasenburg 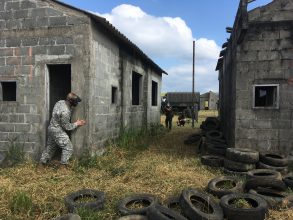 Urban Operations – Cadet Ross Martin, Montana State University, tries his luck as he employs the “Israeli View” method to obtain a target in an urban environment.

recommends all Cadets consider the program no matter their level of experience.

“I have met lifelong friends here. I am a MSII (ROTC Military Science II) so most of my team were MSIII. They where preparing for advance camp the whole time. I learned so much just listening to their conversations or interacting with them. Even marching, I had never experienced that before.  I was challenged way more personally, physically and mentally than I thought I was going to be.

Cadets interested in the Cultural Understanding and Leadership Program can apply online at the Cadet Command Website.