FORT KNOX,Ky. – Another busy summer at Fort Knox, KY began with the arrival of key personnel and leaders from across Cadet Command for Cadet Summer Training. Similar to other years, a large contingent of recently commissioned Second Lieutenants will spend their summer as Observers, Coaches, Trainers committee staff officers, OPFOR platoon leaders prior to attending their branch’s Basic Officer Leader Course in the fall.  CST cadre with support from approximately 1,000 Second Lieutenants will provide world class training on basic Soldier skills and leader development opportunities for third year ROTC cadets, also known as MSIIIs, from across the nation.

The first batch of 2ndLt.s arrived in mid-May and were immediately put to work filling out in-processing paperwork, taking on-line training courses for computer access, and then sent to the Burke motor-pool for vehicle licensing and dispatch. 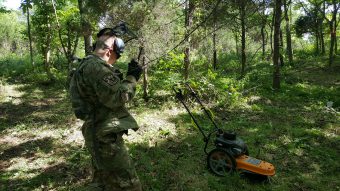 2ndLt. Jessica Mozie (South Carolina State University), assigned to Advance Camp Tactics as the S1, commented on this great opportunity – “I’m thankful for the opportunity to learn about my job as a newly commissioned AG Officer, be with my peers, network with others and start my Army career. 2ndLt. Mozie along with 23 other 2LTs were the first group to arrive and were greeted by Col. Richard Garey (Penn State Professor of Military Science) at the Fort Knox Copple Center.  Col. Garey is the deputy commanding officer of advance camp tactics and is a four year CST veteran.  He took charge of the lieutenants and immediately began counseling them on their responsibilities and set high expectations for their summer at Fort Knox. AC tactics will eventually receive 60 2ndLt.s to assist with managing multiple training areas and cadet FTXs.

Once the lieutenants finished in-processing they were sent to the field with shovels, weed whackers, and brush hogs to clear overgrown vegetation and build “objectives” in training areas 8, 9, 10, and 12, also known as Wolverine, Grizzly, and Panther.  Many of the lieutenants were surprised by the hard, sweaty filed, but were left a feeling accomplished for a good well-done.

2ndLt. Beekman (Central Michigan University) agreed that his summer at Fort Knox will be a great experience because he will be “doing all the things he will be doing as a 2LT; receiving missions, then planning, preparing, and executing missions.  It’s a head-start before I get to BOLC.” 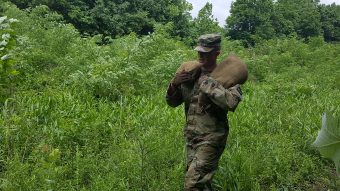 Training areas, tactical assembly areas, and objectives need to be set-up prior to the cadet FTXs.  During the FTXs cadets assume leadership roles at the platoon level and are evaluated on their leadership ability as they plan, prepare and execute tactical operations.  A MILES equipped OPFOR, realistic scenarios that are tailorable to the training audience, and expert cadre make CST a major training event for the MSL IIIs and the entire command.  Over 6,400 Officers, NCOs and DA civilians are required to hold this event.